Virtual desktops are being introduced to the factory floor as part of a change of work styles for development and production operations. Demands for larger screens in order to improve the operability of computer support for designing and analyzing increasingly complex products through computer-aided design (CAD) and computer-aided engineering (CAE) are rising, and there is a need for more efficient transmission technologies for sending those bigger screen images over the network.

Virtual desktop technology runs the user's applications on a virtual server in a cloud environment and transfers desktop images to thin clients or other terminal devices. This helps keep ICT equipment costs down, maintains data security, and allows for a change in work styles. This technology is used primarily for office work, and more recently it has also started to be applied in development and production operations where products are designed and analysis applications such as CAD and CAE (Figure 1) are utilized.

As products get more complicated, there are increasing demands to enlarge desktops in order to display product images in their entirety with visible details. With a virtual desktop, bigger desktops mean more network bandwidth is used when sending desktop images. In order to increase virtual desktop sizes without incurring the higher cost of enhancing network infrastructure, virtual desktop images need to be transmitted more efficiently.

The technology has the following key features

1. Optimization technology for high-quality compression and to reduce processing load for virtual-desktop screens

Unlike broadcast images shot with a camera, a virtual desktop screen, with its extremely sharp lines drawn with CAD, CAE or other applications, has the characteristic of completely still-image backgrounds or other spaces. The technology maintains linear sharpness by optimized encoding mode selection, including block size and intra prediction mode, and largely obviates the processing load for still-image regions by optimized motion vector searches (Figure 2). 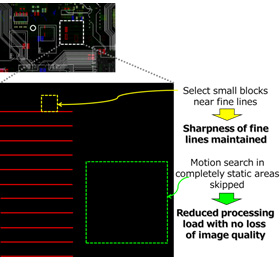 Typically, static areas and moving areas within an image to be transmitted would be flagged separately, and appropriate compression schemes would be applied to each to maximize the overall compression of the data to send. This approach, however, results in increasing the volume of data when static and moving images frequently switch. To solve this problem, Fujitsu developed a function that shares encoded images for reference between still-image coding and video coding (Figure 3). This has the effect of reducing data volumes needed for switching, even when regions of the image to send frequently switch between still image and video, as is the case with screens where CAD or CAE software is being manipulated. 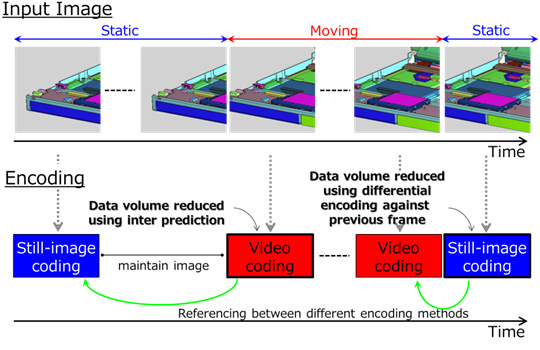 This technology had the effect of cutting network bandwidth roughly in half while maintaining image quality (Figure 4), making it possible to transmit a virtual desktop image with double the size (pixel count) while using the same network bandwidth. This enables larger virtual desktops without additional network infrastructure, for a more functional design environment. 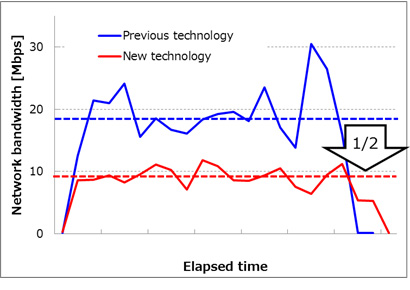 This technology is due to be included in FTCP Remote Desktop(2), an engineering cloud, to be released in May 2015.

Fujitsu plans to continue introducing new video-coding technologies and developing technologies that will improve the performance of virtual desktops in manufacturing environments and elsewhere.