Fujitsu Limited and Global Mobility Service, Inc. (GMS(1)), a venture company providing mobility services, today announced that they will commence field testing to expand services in the Republic of the Philippines so as to increase the prevalence of electric tricycles (a three-wheel taxi) that use ICT.

GMS has already conducted a trial in Metro Manila that ran from September 2014 through January 2015 using electric tricycles with proprietary sensing technologies and ICT, such as remote vehicle-control systems, fare-authentication systems, and anti-theft systems. The company plans to begin actual services the second quarter of the calendar year.

Fujitsu will be working with GMS to connect their system to the FUJITSU Intelligent Society Solution SPATIOWL(2), for a field trial of additional services in Metro Manila that will begin in late 2015. These services will include a feature for estimating the available driving range based on the battery reserves and power-consumption profile, a service showing the routes to charging stations, and a service that plans routes to consume the least amount of power. Following the trials, these functions will be added to the service that GMS is launching in the second quarter, and will be put into operation in the Philippines in fiscal 2016.

This collaboration between GMS and Fujitsu will support more widespread use of electric tricycles in the Philippines and contribute to an improved environment and convenience. The companies are considering services in other Southeast Asian countries and China as the market for electric vehicles is expected to expand. 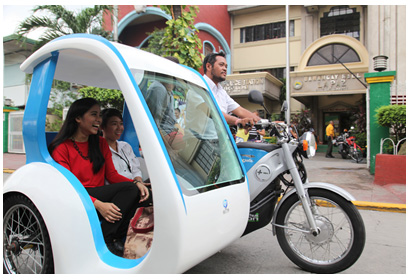 Photo 1: An electric tricycle in the Philippines 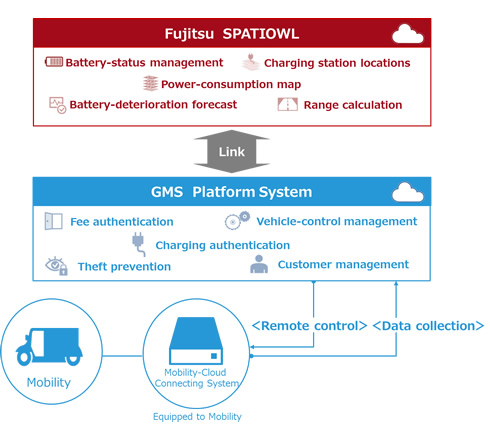 Figure: How the GMS Platform System and SPATIOWL work together 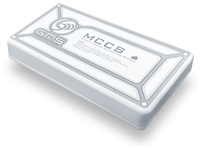 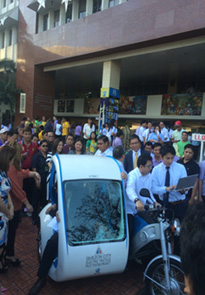 The more than 3.5 million gasoline-powered tricycles in the Philippines are a fixture of the country's everyday life. But as the air-pollution problem worsens, the government of the Philippines is moving to introduce 100,000 electric tricycles, which produce no exhaust gases. Also, as electric vehicles take hold in other Southeast Asian nations, opportunities will grow throughout the region.

GMS developed Mobility-Cloud Connecting System, which enables remote vehicle control, and conducted a trial of mobility services that can track a vehicle's current location and disable a vehicle if usage-fee payments fall into arrears. The trial, which took place in Metro Manila, the capital area of the Philippines, ran from September 2014 through January 2015. Since then, GMS reached an agreement with one of the Philippines' leading infrastructure companies, the Tricycle Operators and Drivers Association (TODA), and Quezon City, the country's most populous urban area, to lead the large-scale deployment of electric vehicles equipped with this service, based upon their evaluation. Business is set to commence in the second quarter.

About the Field Trial

By combining GMS's mobility services with Fujitsu's SPATIOWL location-information cloud service, drivers can see an estimate of their remaining driving range based on their battery reserves and years of battery usage, as well as the best places to recharge, minimizing the risk of running out of electric power. Furthermore, using the data stored in SPATIOWL, such as electric tricycle driving data, battery-status information, road conditions, and weather, the system creates a power-consumption map showing power-consumption rates for each road, so that drivers can pick the most power-efficient route. And because vehicle-status information such as battery condition and number of motor rotations will be stored, this information can be used to analyze ways to minimize deterioration over time, and to predict and give advance notice on breakdowns.

These measures will allow GMS and Fujitsu to make the most of the advantages of electric tricycles and raise the quality of the tricycles themselves. By providing services that encourage the widespread use of electric tricycles, the companies hope to reduce air pollution in the Philippines and maximize benefits for TODA, by their utilization of low-cost electricity.

In the field of vehicle IoT, GMS is a Japanese company which utilizes a remote control technology, and provides epoch-making service.GMS is based in Japan and the Philippines and, several people on behalf of Japan joined as a stockholder, and gather high expectation. MCCS(Mobility-Cloud Connecting System) is a product which originally developed with the innovative IoT technology and can be installed in any kinds of mobility including a vehicle.GMS builds sustainable traffic society by the epoch-making service using this technique in cooperation with the local government and related companies in the Philippines.
GMS produces new lifestyles and realizes epoch-making business creation with a finance company, a security company, an insurance company, the government, the local government as examples.