Automatically delivers drivers via plug-and-play regardless of operating system

Fujitsu Laboratories Ltd. today announced the development of Web OS technology that automatically connects smartphones, regardless of operating system, to peripheral devices and sensors, and enables integrated use with cloud services.

Conventionally, connecting peripheral devices to smartphones, tablets, and other smart devices requires a dedicated application on the smart device for each device, with different versions for different OS. This gave rise to issues of convenience and development cost as users needed to install applications, and it was necessary for developers to create applications for each OS and device.

Fujitsu has now developed technology that enables Web applications, which are typically written in HTML5, run on smart devices to control devices, so that cloud services and devices can be easily connected and combined.

This enables service providers and device makers to develop applications and drivers that are not tied to a particular operating system, and enables service users to instantly connect these devices to their mobile smart device.

In the world of the Internet of Things, where 50 billion devices are projected to be connected to the network by 2020, it is expected that users will be able to connect their smart device to these devices to control them, gather data from them for analysis, and use the results of that analysis to benefit their work and daily lives.

Fujitsu has been working to create the "hyper-connected cloud," which is intended to support the work and daily lives of people carrying IT devices by connecting Web services and devices. To make this a reality, of increasing importance are advancements in technologies connecting these devices to the smart devices that serve as the point of contact between devices and people.

Until now, connecting devices to a smart device has required dedicated applications that carry drivers allowing for the control of the devices and functions that enable the use of cloud services, with different versions for each OS. This has obliged service providers and device makers to develop different applications and drivers for each OS, and to update them when OS are upgraded, leading to considerable development cost.

Also, connecting to devices has required users to go through multiple cumbersome steps, including changing network settings, searching for devices, and downloading and installing applications.

Web applications, such as those written in HTML5, are used as one way to reduce OS dependencies; however, device drivers still need be developed for each OS and incorporated within the application for distribution, which does not solve OS dependency. On the other hand, although the Web OS approach offers a browser-based environment comparable to a desktop, which is a known runtime environment, drivers cannot be distributed that way, making it difficult to apply this method to peripheral devices.

By constructing a proprietary application runtime environment layer that enables control of devices, Fujitsu has developed technology that makes it possible to connect cloud services and devices from a Web application (Figure 1).

To allow for peripheral devices to be used independent of the OS, Fujitsu developed an interface bridge that in the Web-application runtime environment connects the Web-based application (the Web layer) to the operating system's general-purpose communications interface. This makes it possible to place drivers on the Web layer, eliminating the drivers' OS dependency.

Also, to enhance the independence of the application, the company developed a device-abstraction API that assimilates the differences of the various drivers. As a result, it is now possible to use different devices without changing apps, for example, accessing a monitor or printer from the same API. 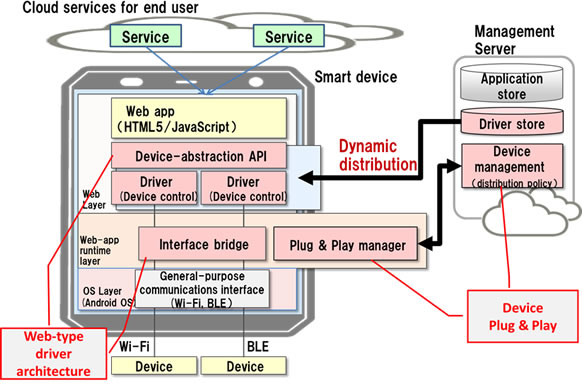 In the past, controlling a printer or other device with a smart device has required the user to take multiple steps, such as launching networking controls on the smart device, searching for the device on the network, and downloading a dedicated app from the application store. With this technology, peripherals can be ready for use instantly. Furthermore, the same app can be used between multiple devices.

This technology can be used in the following scenarios:

It can be used to let a caregiver easily operate devices at a patient's home and connect to back-end reporting services. For example, measurement results captured by measuring devices in the patient's home that previously were manually input into smart devices can be automatically organized into a logbook or other document.

Using the various devices that are being added to vehicles will become easier, for example, connecting to a display located in the rear seat of a taxi, or accessing a car navigation system.

It can be used to access devices provided at tourist destinations and in hotels, for example, connecting to the hotel room's speakers or TV for listening to music or watching videos.

Because developers can focus their efforts on developing OS-independent applications and drivers, they can reduce their workload by two-thirds or more when supporting three different OS. And because users can avoid the trouble of installing drivers for every device, devices are usable immediately as long as they are listed in the system. In addition, managers can control what devices can be used through policy settings.

Fujitsu is expanding the list of supported devices and proceeding with operational testing, with the goal of practical implementations of this technology in fiscal 2016, for the purpose of providing services in all arenas of human activity.