Fujitsu today announced the release of a new, enhanced version of FUJITSU Manufacturing Industry Solution EXAMAG LLG Simulator(1), a software package for simulating magnetic fields with support for massively parallel computing. The new version will be available from March 24.

The product simulates the behavior of magnetic bodies, including the speed and stability of the magnetization process in magnetic materials. When used as part of the development process for hard-drive heads or other memory devices, this software can help reduce the number of prototypes and improve performance. This new version adds the ability to simulate the spin-transfer torque effect, in which the application of an electric current can change the magnetic orientation of an electron. This feature enables simulations of the data recording process of next-generation magnetic memory, which is designed to offer the benefits of higher speeds with lower power consumption. The new version, which now runs on Windows as well as Linux, also includes faster rendering of on-screen graphics showing the calculated behaviors of magnetic bodies.

The product has potential applications in developing new magnetic materials, as well as new magnetic devices that use the spin-transfer torque effect.

Keyboard shortcuts for the player:

Keyboard shortcuts for the player: 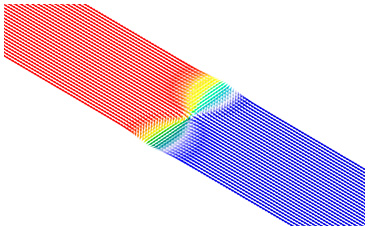 Magnetic materials are used in a wide range of magnetic devices, including heads for hard drives, memory devices, DC/DC converters, and non-contact electrical chargers. When designing these devices, it is important to understand the behavior of magnetic bodies, such as the speed and stability of the magnetization process in magnetic materials. This software simulates the movements of electrons when the type, shape, and operating conditions of a magnetic body are changed, helping to optimize the design of a wide range of magnetic devices for improved functionality and performance.

This new version adds the ability to simulate the spin-transfer torque effect, which is being studied as a way to achieve faster and more power-efficient magnetic memory and magnetic heads for higher-capacity hard drives, in order to meet the ongoing need for devices with more functionality and higher performance.

The EXAMAG LLG Simulator runs high-speed simulations using massively parallel computing, combining micromagnetics techniques(2) and the finite-element method(3), allowing PC servers to be used for the intensive computations involved in analyzing the designs of magnetic devices and the magnetization processes of magnetic materials with complex shapes.

Newly added features are as follows.

Fujitsu significantly redesigned the user interface to deliver a more comfortable analysis environment, and increased the speed at which simulation results are displayed on the graphics screen by at least ten times. In addition to Linux, the new version also runs on Windows PCs to support a wider range of work environments.