Will evaluate effectiveness of collecting information with smartphones

Fujitsu Limited and Fujitsu Vietnam Limited today announced that, with support from the Vietnam Office of the Japan International Cooperation Agency (JICA), they have begun to study the effectiveness of a participatory disaster prevention system for Thừa Thiên Huế Province in the Socialist Republic of Vietnam. In the system, resident representatives visually measure and use a smartphone app to report on river water levels and rainfall amounts at major locations within the province, and also to send images of conditions in neighboring areas and their comments, along with smartphone GPS and time data. This data is collected in Fujitsu's datacenter for use by the province's Department of Agriculture and Rural Development for its disaster prevention and mitigation efforts.

With the Department of Agriculture and Rural Development, Fujitsu and Fujitsu Vietnam will conduct this study through December 2015, and then the effectiveness of the resident-participatory system will be verified by comparing it to the effects of disaster prevention and mitigation activities based on measurements from conventional sensors and outdoor cameras. In parallel with these efforts, by using data mining of Twitter traffic over the past two years in Vietnam, Fujitsu will analyze the relationship between the content of Twitter messages and the places and times where actual disasters occurred.

Fujitsu and Fujitsu Vietnam are providing the smartphone application used in this study, a platform for data collection, aggregation, and analysis of disaster predictions, a website for disaster information, and an environment for analyzing Twitter information.

Thừa Thiên Huế Province, located in central Vietnam, is an area frequented by typhoons and tropical cyclones, and there is an urgent need to develop measures to protect against damage caused by wind, floods, and landslides. Because equipping areas with sensors and outdoor cameras requires much time and money, the Department of Agriculture and Rural Development, which is heading disaster prevention efforts with the objective of developing the country's agricultural sector, wanted a solution that could be deployed quickly and economically. 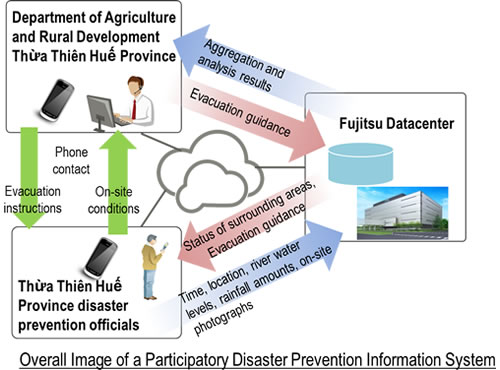 Overview of the Study

Area around the Ta Luong Bridge on upstream Bo River and A Roang Village on upstream Huong River in Thừa Thiên Huế Province (approximately 5,000 square kilometers, with a population of about 1.1 million), Vietnam

Department of Agriculture and Rural Development and residents of Thừa Thiên Huế Province.

Using Fujitsu's data mining technology, Fujitsu and Fujitsu Vietnam will, based on a study of disasters of differing scales that have occurred in Vietnam during the past two years, efficiently collect Twitter messages relating to a disaster, analyze sudden increases in the volume of messaging when the disaster occurs, extract valuable information from the messages collected, and categorize them. Based on the results of this analysis, the effectiveness of using Twitter in Vietnam's disaster prevention and mitigation activities will be evaluated.