The Public Works Research Institute (PWRI) and Fujitsu Laboratories, Ltd., today announced that they have developed technology that automatically adjusts the parameters, such as the final infiltration rate and the runoff coefficient (ease by which rainwater enters soil and ease for water to flow downstream), of flood forecasting simulators that calculate a river's flow when predicting floods.

Currently, flood forecasting simulators are used in some river management work to predict the discharge of a river's flow, which is important in flood management measures. For a simulator to reflect the conditions of the river basin with high accuracy, it is desirable to use a distributed runoff model, which includes topography and models land-use distribution, such as forested and developed zones. However, determining the optimal parameters for increasing predictive accuracy has proved problematic.

Now PWRI and Fujitsu Laboratories have developed technology that automatically determines parameters for distributed runoff models based on the selection and application of optimization algorithms. As a result, flood forecasting simulators based on distributed runoff models can be operated configured to the optimal settings, and river managers can make appropriate decisions on measures for disaster prevention and mitigation based on the forecasted discharge of river flow.

Details of this technology will be announced by PWRI and Fujitsu Laboratories at the 59th Conference on Hydraulic Engineering of the Japan Society of Civil Engineers, opening Tuesday, March 10, at Waseda University in Tokyo.

River management offices already predict the river discharge during typhoons and heavy rains, and dispatch managers to affected areas to give residents evacuation orders and mitigate the effects in other ways. But with the increasing scale of natural disasters, such as concentrated downpours, a more sophisticated approach to flood defense is demanded.

Flood forecasting simulators are an effective way to predict river flows, which is an important part of flood defense. Distributed runoff models, which model the distribution of land use and topography near the river, enable detailed river simulations and sophisticated river management.

For flood forecasting simulators based on the distributed runoff model to be broadly useful as a flood defense, the parameters used to model past floods need to be correctly tuned. This tuning process has required the advanced skills of specialists and expert knowledge on river engineering and hydrology.

As the product of their first year of collaborative research, PWRI and Fujitsu Laboratories have developed technology that automatically sets the parameters used in flood forecasting simulators (Figure 1).

1. Selects optimization algorithms for the distributed runoff model, tests against past floods

Taking rainfall data from past floods as inputs, the technology compares the discharge calculations produced by the flood forecasting simulator with actual discharge data. Here, the set parameters are automatically tuned with the calculation technique called mathematical optimization, which is a way to get the best possible answer from the applied rule in a small number of attempts.

Fujitsu Laboratories and PWRI evaluated 75 types of optimization algorithm and selected the 13 that best fit with the distributed runoff model. They also developed a mathematical optimization platform that automates the selection process.

For 15 examples of river floods in Japan, the partners compared actual discharge measurements with the calculation from the flood forecasting simulator. On the Nash-Sutcliffe model efficiency coefficient(2), which evaluates a model's predictive power, models are more accurate the closer their index value is to 1, and this model produced values of 0.9 and above (Figure 2), indicating accurate predictive power. 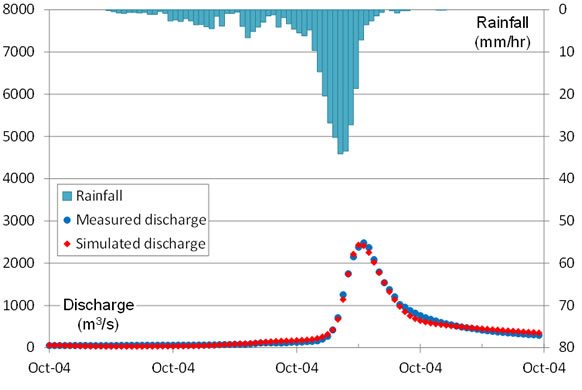 By analyzing the various statistics that can be used to characterize a flood and the parameters that have good reproducibility for each flood, the partners were able to clarify the relationship between a given parameter and a given discharge, for a ratio between rainfall and discharge volume. This knowledge is useful information when tuning parameters for a new flood.

With this technology, flood forecasting simulators based on the distributed runoff model can be run while parameters are tuned to optimal conditions, which will empower river managers to determine appropriate disaster prevention and mitigation measures based on river flows predicted under optimal conditions.

By performing validation using a variety of floods, PWRI and Fujitsu Laboratories seek to improve the predictive accuracy of this technology with the aim of practical implementation in fiscal 2016. Moreover, to make flood forecasting simulations more widespread, they will incorporate a mathematical optimization platform into the Integrated Flood Analysis System (IFAS)(3), evaluate its performance in multiple river basins, and work to achieve real-time flood forecasting by data assimilation through the integration of simulations and observational data.