International Research Institute of Disaster Science (IRIDeS), Tohoku University and Fujitsu Laboratories Ltd. today announced their joint development of a high-resolution tsunami model, able to run on a supercomputer, and based on Tohoku University's existing TUNAMI-N2(1) simulation model, which is in widespread use internationally. For this project, IRIDeS prepared the model to perform high-resolution calculations, and Fujitsu Laboratories implemented methods for high-efficiency parallelization.

The Great East Japan Earthquake far exceeded the scale of previously envisioned earthquakes, causing underestimations of tsunami height made three minutes after the start of the earthquake, exposing an urgent need to improve methods of real-time estimation. The disaster also illustrated the need for information beyond wave height, such as the scope of flooding. Now Tohoku University and Fujitsu Laboratories have developed a tsunami model that quickly predicts the extent of flooding from sea surface deformation, which is the source of the tsunami and is estimated based on observation data on the shape of the tsunami out at sea and on tectonic shifts onshore at the time of the earthquake. For example, flooding in the Great East Japan Earthquake started in Sendai one hour after the earthquake struck. With this technology basic predictions of where flooding would occur in the City of Sendai can be provided in about 10 minutes for the Great East Japan Earthquake case.

This research was published on February 24th in an online preview of Geophysical Research Letters, a journal of the American Geophysical Union.

In the aftermath of the Great East Japan Earthquake, for the purpose of improving tsunami disaster prevention, work has proceeded on laying out an extensive, fine-grained offshore tsunami observation grid. At the same time, to make the best possible use of that observation data, there has also been a vigorous R&D push to develop analytical techniques for more sophisticated real-time tsunami forecasting.

Tohoku University and Fujitsu Laboratories have moved forward on joint research since 2014 to enable not only predictions for when tsunamis will hit coastlines and for tsunami wave heights, which are released by the Japan Meteorological Agency, but also real-time forecasts of the extent of tsunami-induced flooding, which are important for disaster-response measures. Tsunami flood simulations currently in wide use are an important practical tool for disaster preparedness, producing flood-hazard maps and more. But this simulator is computationally intensive, and takes time to solve nonlinear equations. As a result, it typically has not been used for real-time analysis.

Under the research project "The advancement of the accuracy of tsunami prediction" (principal investigator: Fumihiko Imamura; project number: hp140222), which is a project of the HPCI Strategic Program for Innovation Research Field 3, "Advanced Prediction Researches for Natural Disaster Prevention and Reduction,"(2) advanced by the Ministry of Education, Culture, Sports, Science and Technology (MEXT), Fujitsu Laboratories and Tohoku University have investigated the feasibility of using their parallelized tsunami model for real-time flood analysis, making full use of the computational power of the K computer(3) to perform highly efficient parallel computations.

Using a wave-source model estimated from observation data collected from the tsunami caused by the Great East Japan Earthquake, the team conducted flood simulations to verify the technology. To reproduce the tsunami's flood dynamics in detail, the team used high-resolution topographic data, modeling an approximate 10 km area around the City of Sendai's coastal districts with a resolution of 5 m.

This testing showed that simulations of the general extent of flooding in the City of Sendai could be completed in two minutes. Performing the same computations on a workstation would take several days. Even including the time needed to analyze the tsunami wave source from the observation data, the time to provide basic flood predictions was estimated to be approximately 10 minutes. This would have been sufficiently fast for the tsunami caused by the Great East Japan Earthquake, which took one hour to reach the City of Sendai.

In addition, using this high-resolution analysis, the team was able to reproduce results actually seen from the tsunami caused by the Great East Japan Earthquake. For example, the embankment of the Sendai East Road was able to stop the tsunami, which then passed through passageways underneath it. For example, Figure 1 shows the estimated arrival times of the tsunami. Figure 2 displays the probability of buildings in a particular area being destroyed based on statistical information. These predictions are given by the newly developed tsunami model. 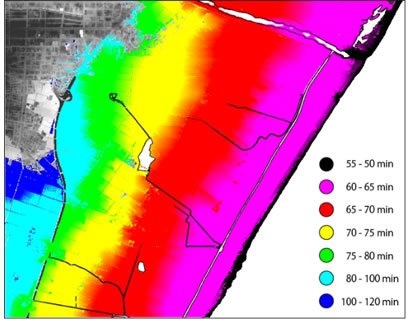 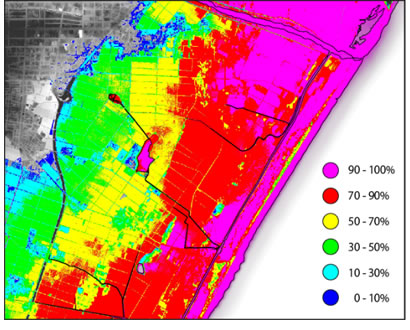 Tohoku University and Fujitsu Laboratories will apply this technology to hypothetical cases of a massive earthquake in the Nankai Trough, which is a large region from which earthquakes originate, and test its effectiveness. In doing so, it is hoped that precise and targeted tsunami forecasts will help local governments and businesses around seaports better prepare tsunami-response measures.

Tohoku University was established in 1907 as Japan’s third national university, and is proud to be ranked among its leading universities. The five main campuses are in Sendai city, built around the ancient site of Sendai’s Aoba Castle.

Tohoku University has a history of innovation and continues to lead in traditional fields of research in materials science, physics and chemistry. As a comprehensive research university, most academic fields of study can be taken including the liberal arts, engineering, medicine, and life sciences. Tohoku University is committed to contributing to its local and global communities, and encourages academic-industry-government cooperation to help strengthen and develop new areas of research. For more information, please see: http://www.tohoku.ac.jp/en.