Optical devices have needed a certain amount of voltage in order to run at high speeds, making it difficult to reduce the power needed for optical transceiver circuits. Now Fujitsu and its partners have developed a technology that allows optical devices to be run at a low voltage by significantly increasing amplitude when there is a change in the data being transmitted, resulting in high-speed operations of 25 Gbps at half the power previously required.

While reducing the amount of power consumed, this technology enables multiple optical transceiver circuits to run in parallel for high-speed, terabit-class transmissions, and is therefore expected to raise the performance of servers and supercomputers.

Typically, with high-speed, 25 Gbps optical transmissions, optical devices operate at 3 volts (V) or higher, compared to the 0.9 V that CPUs and other electronic circuits need. Because transmission circuits that drive optical devices also operate at higher voltages in order to constantly send high-amplitude signals to the optical devices for high-speed operations, reducing their power consumption has proven difficult. Conversely, if optical devices operating at 0.9 V, the same low voltage as the CPU, were employed to consume less power, only a problematically low-speed operation of around 1 Gbps could be achieved (Figure 2). 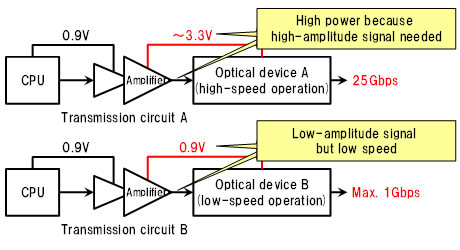 Now, by amplifying the transmission signal only when the signal from the CPU changes to -1 and +1, the researchers on this project succeeded at generating amplitudes intermittently at around 1.8 V. As a result, the supplied voltage is 1.8 V, lower than the 3.3 V previously required, and because power is not used with smaller amplitudes when the data do not change, less power is consumed.

The principal behind this technology is that the data being transmitted is combined with delayed data that is multiplied by -α (where 0 < α < 1), so that when the transmission data changes from -1 to +1, +1 is amplified to +1+α. On the other hand, when the transmission data changes from +1 to -1, -1 can be amplified further to -1-α (Figure 3). This technology enables both higher speeds and lower power consumption, and the researchers on the project confirmed that they could achieve high-speed transmissions of 25 Gbps while operating at half the power previously required, achieving operation of 5 mW of electricity per 1 Gbps of transmission speed (Figure 4). 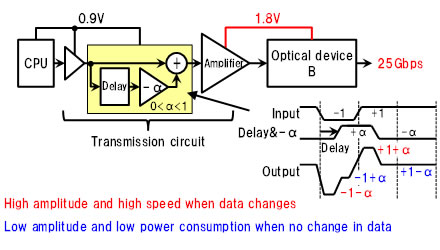 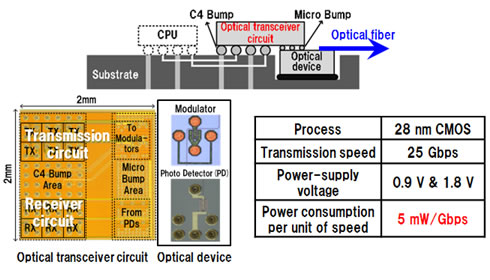 While reducing the amount of power consumed, this technology enables multiple optical transceiver circuits to run in parallel for high-speed, terabit-class transmissions, and is therefore expected to raise the performance of servers and supercomputers.

Fujitsu Laboratories is applying this technology to the interfaces of CPUs and optical modules, and aims for practical implementations in fiscal 2018. The company is also studying applications in the next generation of high-performance servers and supercomputers.

Fujitsu Laboratories of America, Inc. is a wholly owned subsidiary of Fujitsu Laboratories Ltd. (Japan), focusing on research on Internet, interconnect technologies, software development and solutions for several industry verticals. Conducting research in an open environment, it contributes to the global research community and the IT industry. It is headquartered in Sunnyvale, CA.
For more information, please see: http://www.fla.fujitsu.com

PETRA is a research association in JAPAN for developing innovative technologies in Photonics-Electronics convergence system.
PETRA was established in 2009, and consists of 11 companies, 1 National Laboratory and 1 Association.