Fujitsu Laboratories Ltd. today announced that it has developed a technology that, in the event of a cloud network failure, enables even non-experts to identify the impact of that failure on virtual systems - within 10 seconds. Up until now, when there were network failures, networking experts worked with server administrators as they needed to investigate the relationship between virtual systems and physical networks. This process could take over three hours in the case of a large-scale cloud environment.

Now Fujitsu Laboratories has developed a technology that identifies in seconds the impact a network failure has on a virtual system. It does this by automatically generating data from communications pathways between physical servers as well as combined data from virtual servers produced by communications, and then analyzing the relationship between the virtual system and physical network communications pathways based on relationships, such as whether each virtual server resides in a respective physical server. As a result, cloud administrators will no longer need to survey relationships, but can identify the impact of a network failure and swiftly report to virtual system users. In addition, even those with no technical network expertise can easily identify failure impact on virtual systems, making possible more efficient operations.

Fujitsu Laboratories will move forward by assessing this technology in a variety of environments, and aims to include it in Fujitsu products within fiscal 2015.

With the spread of cloud computing, many systems today are built in the cloud. Moreover, servers and networks are becoming virtualized in cloud environments and multiple systems, being built into the same physical infrastructure, are increasing in complexity. This leads to a heavier operational workload.

In cloud system operations, when there are failures in the physical infrastructure, providers will typically identify the impact on virtual systems, and report to that system's users the status of failure and outlook for recovery. Mitigating operational burden in this way is a significant challenge.

Ordinarily, with cloud environments, there are network administrators who manage networks and server administrators who manage physical servers, with each managing the virtual systems and physical infrastructure within the scope of the equipment that they are respectively in charge of. Even with conventional operations management technology, the identification of the impact of failure on virtual systems can been performed relatively quickly, but identifying the scope of the impact more precisely has required a network operations specialist to coordinate with a server administrator to match up all the physical links that communications between physical servers will traverse based on network equipment configuration. This process of identifying the affected scope could take several hours (Figure 1) in large-scale cloud environments. 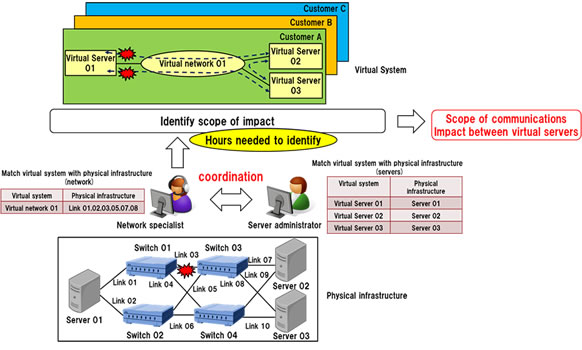 To identify where communications between which virtual servers are being affected by network failures requires that communications pathways between virtual servers be matched with those of physical networks, but because that information is split among different administrators, it has been difficult to match the virtual systems with the physical infrastructure.

2. Identifies scope of impact while accounting for redundant network pathways

When redundancy is used for physical networks to improve reliability, in addition to the network communications pathway data of physical networks, the technology is able to manage data on the conditions of the active pathways normally used as well as reserve pathways. In this way, a determination of impact is limited to only when network failures are affecting active communications pathways when a failure occurs, and identified only with real impact on communications between servers (Figure 3).

By using this technology, when network failures occur, cloud administrators do not need to spend hours to survey relationships, as they had done in the past, and it is possible to identify the impact of failures with communications between virtual servers in less than 10 seconds. Moreover, even operations managers lacking technical knowledge can identify the communications between the virtual servers impacted by failures, enabling them to respond more efficiently.

Fujitsu Laboratories is conducting evaluation testing under a variety of conditions, with the goal of incorporating this technology into Fujitsu products during fiscal 2015.