Enables constant updates on status of people with wearable devices

Fujitsu Laboratories Ltd. today announced that it has developed sensing middleware that can simplify development of low-power sensing applications needed by wearable devices. This will enable the creation of a usage environment in which a variety of wearable devices can be worn naturally, without user concern.

Many wearable devices require battery power, so there has been a need to build in applications that can allow for long run times.

Fujitsu Laboratories has now developed sensing middleware that automatically differentiates sensors installed on each device so as to operate them at the lowest power levels possible, eliminating the need to build in to each individual sensor. By incorporating firmware that supports this middleware into wearable devices, application developers can easily create low-power applications with approximately one-tenth the work previously required, simply by specifying the activity sensors and ambient sensors from which they want to acquire information.

By spreading the use of this technology, Fujitsu Laboratories seeks to promote the development of wearable devices that are capable of continuous sensing with the aim of helping to bring about a society which can easily adopt a variety of ICT services, such as hands-free onsite work assistance or automated recording of detailed work logs.

Smartphones and other mobile devices are equipped with a variety of sensors, which are used in new services such as support in finding nearby stores and health management. In recent years, numerous wearable devices have emerged, and as they gather ever more data on the locations and activities of people who wear them, there are expectations that services will become increasingly customized.

Wearable devices have great potential to make ICT accessible in the workplace, especially on the frontlines of maintenance, manufacturing, and retailing. Unlike smartphones or tablets, wearable devices enable hands-free access to information. This means work can continue without being interrupted by having to operate a device. In factories, warehouses, hospitals, or stores, these could be used to give directions to a location where a task will be performed while walking, and to give instructions on the task once the operator arrives at the location, delivering just the information that is needed, when it is needed, based on the operator's activity and surroundings. This has the potential to cut down on operator errors and improve operator efficiency (Figure 1).

Figure 1: Example of a wearable device being used for workplace assistance

Delivering timely information to people based on their current situation without requiring them to consciously operate a device requires constant data collection. But because smartphones and wearables operate on battery power, developing applications and supporting services requires sophisticated techniques to use sensors without excessive battery drain.

In the case of smartphones, it is relatively easy to develop various applications that use sensors, thanks to sensor APIs, but to restrict the active sensors to the minimum needed and provide precise control over power requires sophisticated programming skills and considerable effort that would only be available to a specialist. Another way that smartphones can reduce power usage is to leave sensor processing to low-power microcontrollers, but that requires custom firmware development for each process.

Fujitsu Laboratories has developed a framework that will simplify development of low-power sensing applications (Figure 2).

Features of the new technology are as follows: 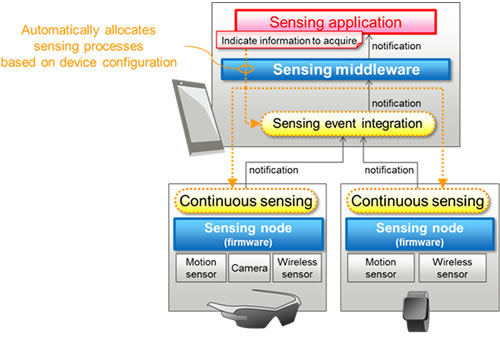 This technology simplifies the process of developing applications that use continuous sensing, without requiring any specialized knowledge of sensing technologies or power management, and cuts the amount of work required to build solutions that use sensing by 90%, while reducing power requirements by more than two-thirds. Additionally, a single application can support multiple similar wearable devices with no rewrites, as long as the sensing nodes are equipped with compatible firmware.

Until now, every low-power solution for wearable devices has required a one-off effort, but with this technology, the customizing work required on the wearable end is dramatically reduced, which shortens development cycles and costs, and promises new solutions and uses for wearable devices.

Fujitsu Laboratories aims to offer practical implementation of this technology during fiscal 2015. Meanwhile, the company plans to release the interface specification for wearable devices to support this technology to device makers, and will promote development of supporting devices.