Fujitsu Laboratories Ltd. today announced that it has developed the world's first technology to optimize the allocation of wireless base stations for LTE-Advanced(1). This design technology determines the ideal placement of base stations through simulations to ensure a smooth communications environment for users.

Details of this technology are being presented at SmartCom 2014, opening October 30 in Singapore.

In existing methods, each base station is assumed to have a unique set of users allocated to it through a process called scheduling, and user allocation rates have been calculated using a fast-calculation algorithm(3). But because this method is incompatible with coordinated multi-point transmissions, it cannot be used to correctly calculate user allocation rates, leaving no way to determine the ideal placement of base stations that use CoMP (Figure 1). 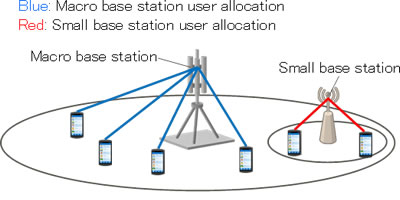 Fujitsu Laboratories has now developed a design technology for allocating base stations that can correctly calculate user allocation rates while taking into account CoMP (Figure 2). In this technique, newly introduced conditions make it possible to rapidly calculate user allocation rates when using CoMP, which in turn makes it possible to determine the optimal placement of base stations with CoMP functionality.

The design process for allocating base stations is as follows.

This technology makes it possible to calculate optimal allocation for LTE-Advanced base stations, and can be expected to dramatically increase communications quality when adding base stations (Figure 3). The result is that a given level of communications capacity can be ensured while adding 30% fewer base stations than would otherwise be needed, while at the same time resolving connection difficulties for mobile communications and providing a smooth communications environment to users.

Fujitsu Laboratories is continuing to study ways to optimize base station allocation, with the goal of a practical implementation around 2016. The company plans to continue adapting this technique to new features of LTE-Advanced and its successor communications standard, 5G(4).