Proposals to be made at World Parks Congress 2014

Fujitsu Laboratories Ltd. today announced that, in partnership with researchers at The Australian National University (ANU) of Canberra, Australia, it will propose new strategies to manage native forests to maximize carbon storage and the benefits of other ecosystem services. The proposals will be made at World Parks Congress 2014.

Fujitsu Laboratories has applied its Life Cycle Assessment (LCA) technology, used to assess its Information and Communication Technology (ICT) products and services, to analyse the post-wildfire state of Australia's native forests, where some of the world's tallest trees flourish. For its part, ANU has used long-term field data to evaluate ecosystem flora and fauna in the Central Highlands in Victoria, Australia. By analyzing ecosystem data obtained in field studies the researchers were able to quantitatively assess changes in the forest's carbon stock(1).

As a result of these studies, the new research has found innovative new methods of sustainably managing native forests from the perspective of carbon storage that keeps volumes of atmospheric CO2 in check and that work for protection of endangered species.

Details on the proposal(2) will be jointly announced with ANU at the International Union for Conservation of Nature's (IUCN) World Parks Congress 2014, the world's largest conference on nature preserves, which will be held starting Wednesday, November 12, 2014, in Sydney, Australia.

ANU has amassed an enormous volume of ecosystem data obtained from approximately 30 years of field work in native forests, including on types and quantities of vegetation, records of growth, types and numbers of mammals, birds and other animals, and is researching the impact of disturbances, such as wildfires and logging, on the forests and the animals that live in them. Fujitsu Laboratories aims to help reduce the burden on the environment and preserve biodiversity through the effective use of ICT. In particular, it has conducted R&D on LCA technology used to assess environmental burden and technologies to assess ecosystems for their conservation value for biodiversity.

This Joint project between Fujitsu Laboratories and ANU has been in progress since October 2012. Fujitsu applied its assessment technologies to the invaluable field data held by ANU to analyze the impact disturbances such as wildfires had on forests.

Japan imports more wood chips than any other country, and 27 per cent of these imports come from Australia. Natural disturbances like wildfires are common in Australia and it is not unusual for wildfires to occur in native forests. Australia has 156 million hectares of forests, accounting for four percent of the global forests, and in 2009 wildfires burned 400,000 hectares of forest land in Victoria.

In Australia, with native forests after a wildfire, salvage logging is undertaken with clear-felling and slash burning . After that it is typical that these areas are replanted with trees to assure future timber resources. Additionally, following a wildfire, thinking that wildlife would have difficulty living in such an environment meant that not much consideration was given to these areas in terms of wildlife protection.

Using ANU data on the ecology of post-wildfire forests, Fujitsu Laboratories and ANU conducted the following joint research, applying Fujitsu Laboratories-developed LCA technologies to evaluate the levels of carbon stocks and biodiversity with regard to wildfires in Australia, which have a huge impact on the level of CO2 emissions and biodiversity.

1) Amount of carbon stock (emissions, storage, and consumption) of the forest's carbon dioxide (carbon conversion): Use of simulations to analyze the relationship between changes to the forest (caused by natural wildfires or human use of wood resources) and amount of carbon. For this, LCA technology was applied to calculate the degree of wood usage as shown in figure 1. This enabled the calculation of wood usage to be expanded beyond just the CO2 emissions within the forest, as prior models have calculated, to wood use of the whole society, resulting in a more accurate calculation of CO2 emissions. 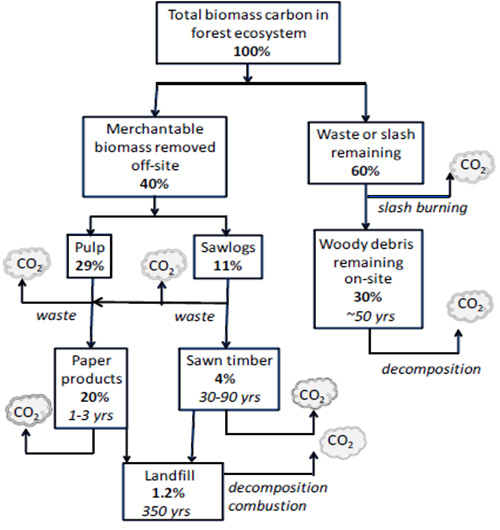 2) Appropriateness as a wildlife habitat: survey and analysis at experimental sites in native forests before and after wildfires of the number of marsupial possums, as a representative endangered species. The following two analysis results papers were presented by two ecology-related academic societies(3), respectively.

Based on the results of this analysis, at the International Union for Conservation of Nature's World Parks Congress 2014, the world's largest conference on nature preserves, which will be attended by policy makers, representatives from the forestry industry, and developers, Fujitsu Laboratories and ANU will jointly present the following new strategies for managing native forests after wildfires and after logging to reduce CO2 emissions and protect endangered species.

1) From the perspective of reducing CO2 emissions, instead of conventional methods involving clear-felling of native forests after wildfires, a forest should be able to naturally regenerate itself.

2) In contrast to the biodiversity conventional point of view based on the assumption that possums do not return to sites after wildfires so there is no need to protect the sites, it was revealed that possums do return after a wildfire, the status and condition of trees remaining after the fire being an important condition. The sites should therefore be designated as protected sites for the possums.

Building on this joint research to appreciate the total value of forests and other natural resources, Fujitsu Laboratories will continue to seek ways of using ICT to preserve biodiversity so that future generations can continue to enjoy nature's bounty, with the aim of bringing about a society in which people and other living things can peacefully coexist.