Fujitsu Laboratories Ltd. today announced that it has produced a transceiver chip for millimeter-wave radar in a complementary metal-oxide-semiconductor (CMOS) implementation, which is a semiconductor process that enables costs to be reduced, while at the same time successfully boosting the short-range detection performance of the transceiver.

Existing millimeter-wave radar uses silicon-germanium (SiGe) transceiver chips. Using CMOS would allow for lower costs and lower power consumption than SiGe, but it is more susceptible to noise, particularly in lower frequency ranges, which has made the use of CMOS for millimeter-wave radar impractical to date.

Fujitsu Laboratories has succeeded in producing a prototype CMOS transceiver chip that suppresses oscillator noise on the receiver circuit by configuring a frequency-conversion circuit so that it is compatible with the 76-81 GHz band used in automotive millimeter-wave radar. This greatly reduces noise levels found in previously attempted CMOS transceivers, resulting in performance equivalent to or better than current SiGe chips.

This technology enables power consumption of CMOS-based millimeter-wave radar to be approximately halved compared SiGe chips, and at lower costs.

Details of this technology are being presented at EuMC 2014, the European Microwave Conference 2014, opening October 5 in Rome.

To make the driving experience safer and more pleasant, cars are increasingly being equipped with technologies that can detect obstacles nearby and even control the brakes or accelerator in response. Technologies used for obstacle-detection include millimeter-wave radar, LiDAR, and stereoscopic cameras. Compared to LiDAR and stereoscopic cameras, which both use the visible wavelengths of light, millimeter-wave radar is relatively unaffected by rain, fog, and reflections, giving it an important role to play as an onboard sensor. The value that sensors such as these bring to cars creates an impetus to develop technologies for implementing these sensors at lower costs. 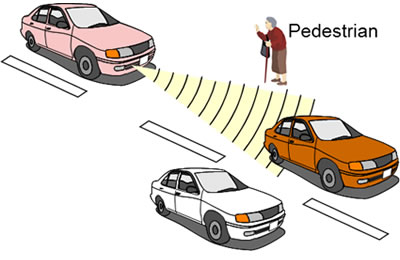 Figure 1: Detecting nearby cars and pedestrians with millimeter-wave radar

Millimeter-wave radar operates using extremely high frequencies known as millimeter-waves in the 76-81 GHz range, and for that reason have required special SiGe bipolar transistors. But advances in semiconductor technology have begun to make it possible to implement millimeter-wave circuits in CMOS, a commonly used and inexpensive technology for digital circuits. Compared to conventional bipolar SiGe transistors, CMOS can run on lower-voltage power supplies, meaning it consumes less power, and although it performs roughly the same in the millimeter-wave range, it had been more adversely affected by noise in the low-frequency range.

In millimeter-wave radar, a millimeter-wave signal from an oscillator is transmitted, the signal is reflected back from obstacles and is received, and the two are compared to determine the distance, speed, and direction of the obstacle. Detection of nearby pedestrians and objects which have weak reflectance is especially problematic (Figure 1). To improve detection of nearby pedestrians, therefore, it was essential to reduce low-frequency noise.

To ensure good detection performance at short distances with CMOS-base millimeter-wave radar requires a solution to the low-frequency noise problem.

The technology developed by Fujitsu Laboratories has the following two key features:

Fujitsu Laboratories used a double-balanced resistive mixer in the frequency-conversion circuit of the receiver. The frequency-conversion circuit takes the frequency difference (IF signal) that occurs from signals reflecting from objects (RF Signals) and local oscillator signals (LO signals). A resistive mixer is a circuit format that can recover IF signals through electricity from LO signals without having to apply power supply voltage so the flow of DC current to a mixer transistor can be kept to a minimum which avoids the increase in low-frequency noise. Additionally, using a double-balanced construction which synthesizes the differential motion of the resistive mixer, noise increase from DC offset that occurs via LO signals input to the mixer can be reduced. It also has the effect of reducing noise below 10 kHz while maintaining high-frequency characteristics.

Fujitsu Laboratories produced a prototype 4-channel receiver chip using this circuit, with functionality equivalent to current SiGe products, along with a prototype transmitter chip that used a PLL synthesizer with low phase noise that the company announced last year (Figure 2). All told, this allowed for a millimeter-wave radar where all of the principal high-frequency circuits were produced using a 65 nanometer (nm) CMOS process. The SSB noise index, which is an indicator of the receiver chip's low-frequency noise, was 12 dB for the prototype, at the same level as existing SiGe products, representing an 18 dB improvement over the figure of 30 dB for CMOS units previously announced at academic meetings and other sources. This improvement represents a significant reduction in noise, equivalent to approximately one-sixtieth of previous levels(1). 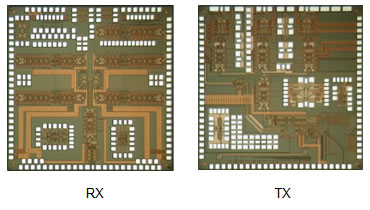 Adapting the widely-used 65-nm CMOS process technology to this application promises easier, low-cost mass production, and with half the power requirements of SiGe bipolar transistors, the power-supply circuitry for the radar sensor can also be less expensive. Furthermore, this makes it easy to combine multiple digital circuits, for more functional millimeter-wave radar in the future.