Fujitsu Laboratories Limited announced that it has developed technology for accelerating wide-area network (WAN) speeds, adapting to different characteristics such as packet loss and delay prevailing on communications networks, including mobile and international networks. The new technology was able to double previous transmission speeds on such WANs.

Existing technologies for accelerating WANs typically require identical accelerator hardware at both endpoints of the WAN, and make no accommodation for the differing characteristics that may prevail throughout a WAN. As a result, depending on the WAN, they were not always able to draw out maximum performance levels.

With this new technology, accelerators are distributed throughout the WAN to automatically select the communications protocols best suited to the network characteristics between accelerators, as well the corresponding sections of the network to which they apply. This has the effect of maximizing speeds between the client and the application server. We developed the technology on software, and testing conducted with the National Institute of Informatics confirmed that the new technology could achieve roughly double the transmission speeds of previous WAN acceleration technology when using mobile devices in Japan to access cloud services abroad.

In light of the ever-increasing volumes of communications traffic expected with the trend toward higher-resolution images and support for real-time communications, this technology enables the creation of communications infrastructure that allows the efficient use of available network bandwidth. When applied to network functions virtualization (NFV)(1), this technology enables the provision of fine-grained network services that are coordinated with a variety of network functions, such as firewalls and load balancers.

Details of this technology are being presented at SoftCOM2014, the 22nd International Conference on Software, Telecommunications and Computer Networks, opening September 17 in Croatia.

Many communications applications today have standardized on TCP, the Transport Control Protocol. But TCP communications over some wide-area networks, such as international networks, may encounter barriers to performance caused by such factors as high packet losses or long round-trip times. One method used to remedy this decline in performance is to install specialized equipment called WAN accelerators at both ends of a WAN, replacing the TCP protocol with acceleration protocols.

With the spread of cloud services and high-speed wireless communications such as LTE, there is an increasing volume of traffic from mobile devices, which, from numerous locations, are used to access cloud services. Increasingly, therefore, WAN accelerators are being used in WANs that comprise different kinds of networks, including intra-city, inter-city, and international, each with their own different characteristics (Figure 2).

In simple terms, picturing conventional WAN accelerators as located at the borders between networks and selecting acceleration protocols suited to the network characteristics between each pair of accelerators, there will be situations in which throughput improves for large-scale file transfer applications. By contrast, with "chatty" applications, however, such as virtual desktop applications, in which relatively small bits of data travel back and forth, because the transmission time for each bit of data traveling back and forth is extremely short, overall data transmission times are, conversely lengthened because of relay delays at each accelerator.

What Fujitsu Laboratories has developed is a technology whereby multiple accelerators are distributed throughout a WAN, and, in accordance with the characteristics of the communication applications and the network characteristics between the accelerators, and they automatically select the most suitable communications protocols, as well as the corresponding sections of the network to which they apply.

The distributed WAN accelerators are controlled in the following sequence (Figure 3).

As a result, as shown in Figure 3A, when transferring a large file, in comparison with the file transmission time, the relay delays at each accelerator are insignificant enough to be largely disregarded, so the number of sections is increased to improve throughput. By contrast, with interactive communications, as shown in Figure 3B, to minimize accelerator relay delays, some of the accelerators are disabled to reduce the number of sections. 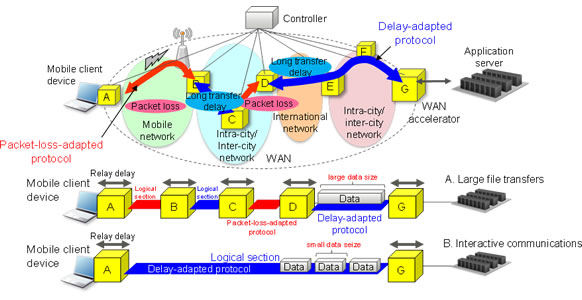 We developed the technology on software and evaluated it cooperating with NII using SINET 4(2) and wireless LAN service eduroam(3) (Figure 4). It was confirmed that in communications on the Japan-North America leg, the acceleration protocol and the section for it were dynamically determined in response to the communications application and the quality of the communications environment between accelerators. For file transfers, the selection chosen was to divide over multiple sections, resulting in transmission speeds roughly doubling. For interactive communications, for cases in which there was no packet loss, the selection chosen was to divide using the same sections used with conventional technology, and there was no performance degradation in the data transmissions. When there was packet loss in interactive communications, the system opted for multiple sections and to allow resends from the WAN accelerator nearest to the client device, which resulted in data transfers in less time than with conventional technology (Figure 5).

The use of this technology could make it more efficient for people on two different continents to collaborate on the same 3D CAD drawing.

Fujitsu Laboratories aims for a practical implementation of the distributed WAN acceleration technology it has developed during fiscal 2015. By applying this technology to network functions virtualization, it will enable the provision of fine-grained network services that are coordinated with a variety of network functions, such as firewalls and load balancers. Accordingly, the company is studying ways to implement the technology in NFV.