Fujitsu announces that it has built a computer system for the Global Precipitation Measurement (GPM) mission being undertaken by the Japan Aerospace Exploration Agency (JAXA), in collaboration with NASA(1) and other international government agencies. The Fujitsu-built computer system, the GPM/DPR (Dual-frequency Precipitation Radar) Mission Operations System, serves as one of the central ground systems of the GPM mission.

The system gathers data from multiple satellites, including the GPM Core Observatory(2), which was launched on February 28, 2014, generating precipitation (rainfall and snowfall) data around the world and distributing it to organizations, including NASA, the Japan Meteorological Agency, the International Centre for Water Hazard and Risk Management (ICHARM), and the Infrastructure Development Institute (IDI).

The system is connected to the NASA's Precipitation Processing System in Maryland, and for some Near Real Time processing operations, it is required to receive data from NASA, process it, and return it in only 13 minutes. To accomplish this, Fujitsu constructed a dedicated system to do the rapid processing. To ensure that data is continually being received, processed, and transmitted correctly 24×7, the system needs to be reliable, and for that reason it uses Fujitsu's own middleware products. Fujitsu has provided a comprehensive system, from the platform to applications to operations and maintenance.

When the system went online on February 28, 2014, JAXA distributed data from the system to a limited number of institutions, and, as of today, it begins providing publicly available online data from G-Portal, its system for providing global monitoring satellite data.

The GPM mission is an international project that aims to improve understanding of the mechanisms underlying the planet's hydrological cycle, contribute to water-resource management, and raise the accuracy of weather forecasts.

The GPM Core Observatory and a constellation of other supporting satellites take multiple observations of global precipitation each day, enabling observation of the status of precipitation in areas where few observations have been taken in the past, such as the oceans. 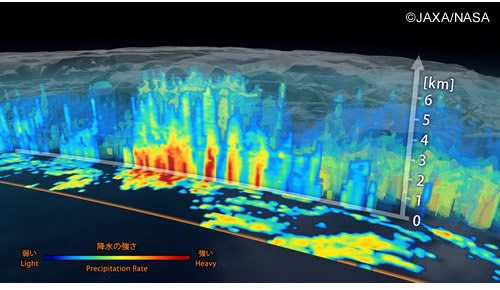 3D image of precipitation distribution based on DPR data aboard the GPM.

The system receives observational data continually, 24×7, from the GPM Core Observatory and supporting satellites via NASA's Precipitation Processing System, generates global precipitation data, including a 3D distribution of precipitation intensity, and distributes that data to organizations, including NASA, the Japan Meteorological Agency, ICHARM, and the IDI. 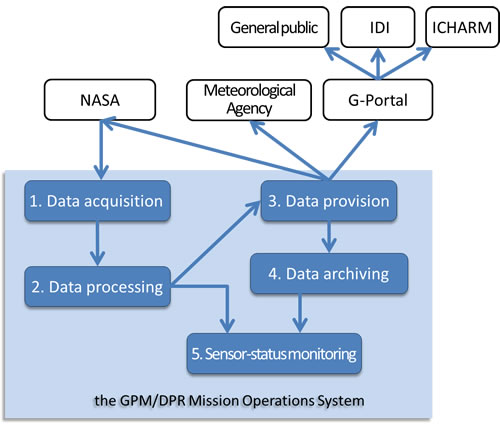 "The GPM project, a joint mission with NASA, involves cooperation among many partners, through which we use data from a constellation satellites, in addition to the GPM Core Observatory. In the process to develop the GPM ground system, we encountered quite a few issues. However, thanks to the support from the GPM satellite project team and all the involved parties, we were able to work through every problem and uncertainty one by one. In the near future I hope to see a wide range of users take advantage of the GPM data processed by this system, and then put to use in improved weather-forecasting systems, the mitigation of damage caused by floods, typhoons and other natural disasters, and a deeper understanding of the mechanisms that underly climate change and extreme weather."