In addition, Fujitsu Limited and Fujitsu Semiconductor have decided to expand the scope of foundry operations. Fujitsu Semiconductor's manufacturing facilities in Mie and Aizu-Wakamatsu, Japan will respectively work to provide stable delivery to customers as new, independent companies, to be established by the end of 2014. The new Aizu foundry company will consist of a 150mm fab company and 200mm fab company, operating within the framework of an Aizu foundry general company.

Fujitsu Semiconductor today also announced that it has entered into a strategic partnership in which ON Semiconductor will obtain a 10% ownership interest in the new Aizu foundry company's 200mm fab company.

Outline of the New Direction of the Semiconductor Business (Progress from the February 7, 2013 announcement) 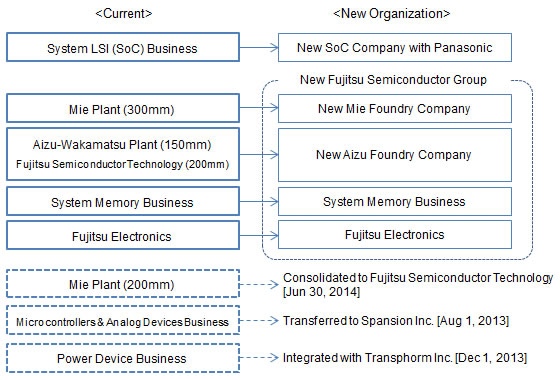