Fujitsu Laboratories Ltd. today announced development of lane-departure warning technology that can be applied to a vehicle-mounted wide-angle camera as a drive recorder(1) to promote safer driving.

In recent years, an eagerly anticipated development in efforts to reduce traffic accidents has been the use of the wide-angle lens of drive recorders, which are increasingly being used mainly on commercial vehicles, together with lane-departure warnings, which alert drivers when deviating from a lane. However, typical lane-departure warning technology relies on narrow-angle cameras that only view the white lines marking a lane at considerable distance. Wide-angle cameras that only view some of the lane markers at a short distance do not always detect the lane correctly, and have yet to meet the expected level of performance for warnings.

Fujitsu Laboratories has now developed a driving lane recognition technology that estimates the correct lane configuration for the entire road by smoothly joining multiple images of the road surface, and compensates for the positional deviations relative to road lane markers. The result is a lane-departure warning performance of 95%, which exceeds the level of devices that use narrow-angle cameras, even with wide-angle cameras. This technology adds lane-departure warnings to bring new preventive-safety features to the driving experience without requiring the installation of a separate camera.

Details of this technology are being presented at the Symposium on Sensing via Image Information (SSII2014), opening June 11 at the Pacifico Yokohama.

As part of preventive-safety measures that reduce accidents, lane-departure warning systems that employ front and rear cameras are becoming more and more common, with some countries making them mandatory and others implementing subsidies to promote their adoption. Lane-departure warning systems use forward-looking cameras to prevent drivers from leaving their lanes accidentally. The standard of performance expected of these systems is that they will issue a warning at a distance of 30 centimeters or less from the lane marker, and this has typically been achieved using a dedicated camera with a narrow-angle lens. At the same time, drive recorders are increasingly coming into use as a way to record accidents and promote safe driving. These typically use cameras with wide-angle lenses. In terms of cost, ideally the lane-departure warning system could work without requiring a separate camera, and, in turn, it would be to have the drive recorder's wide-angle camera fulfill the lane-departure warning function with sufficient performance.

Viewing a curving road through a narrow-angle lens shows multiple dashed white-stripe lane markers along the road (Figure 1a), whereas viewing through a wide-angle lens (130°) only shows what is close, and will only show the nearest pair of stripes left and right (Figure 1b). Because the stripes are only about eight meters long, this is not sufficient to recognize the bend in some roads (depending on the curvature), so a curving road could be mistaken for a straight one, mistaking the distance to the next white lines. 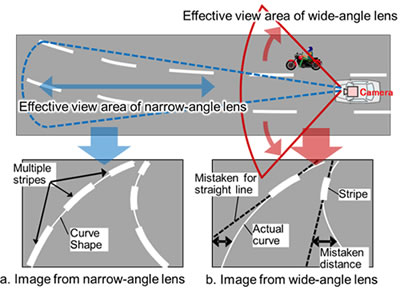 Figure 1: How images from wide-angle lenses produce errors in estimating the shape of curved lanes from lane markers

Japan uses short, doubled white lines to warn motorists to slow down for sharply curving roads. When viewing these doubled lines through a wide-angle lens, the low resolution of the lens makes it impossible to distinguish the inner speed-warning lines from the outer lines that mark the lane's actual boundaries (Figure 2), so the inner lines are mistaken for the actual lane boundary, erroneously setting off the lane-departure warning. 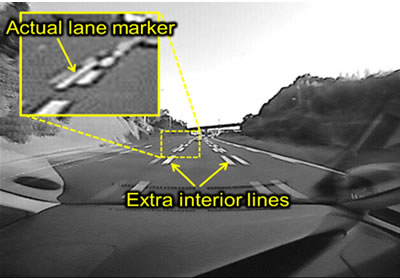 Fujitsu Laboratories has now developed a white-line detection technology that compensates for the low resolution that comes with wide-angle lenses by stitching together multiple images over time to create an accurate picture of the entire road, making it possible to accurately estimate lane configuration.

Building on the insight that road shapes do not change significantly in a very short amount of time, this technology models the lane shape by stitching together a time series of images shot every 100 milliseconds, for example, to array white lines correctly. The vehicle's movement introduces some deviation into the positions of the white lines in the images, so simply stitching these images together would not work. Therefore Fujitsu Laboratories developed a technology that simultaneously estimated the vehicle's movement and lane shape to correctly estimate lane configuration (Figure 3).

Specifically, it works as follows:

The lane-estimating process needs to work in real time for each image, or else the lane-departure warning will come too late. Method 1 above can reliably recognize lanes, including curves, but using multiple images over time is an inherently intermittent process, making it difficult to achieve genuine real-time performance. With most lane configurations, an understanding of the curvature of the road will enable an estimate from a single image at every time increment. Using Method 1 just to calculate curvature with multiple forward-looking images from the immediate past (Figure 4), Fujitsu Laboratories developed a method for estimating the remaining lane-shape parameters (such as road width and vehicle heading) from the lane markers in the current image, which differs in time from the curvature-estimation timing. As road curvature does not change significantly over a short period of time, there's little loss in accuracy from estimating lane configuration based on the most recent images. This method can be used to estimate lanes in real time at each time slice. 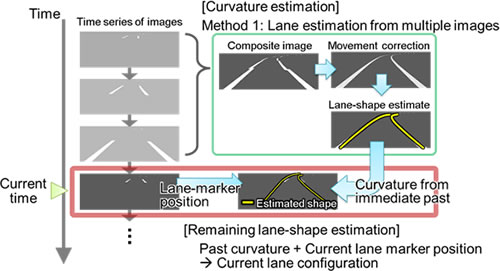 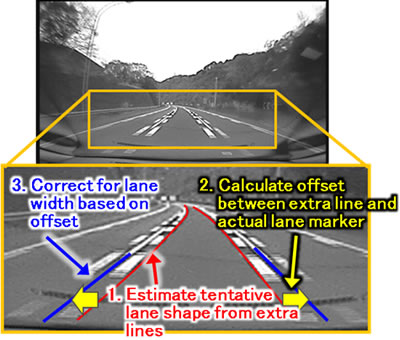 When assessed using 160 minutes of actual camera imaging data, this technology was found to result in performance accuracy of 96%, roughly double that of existing methods, and meeting the standards of performance for measuring distance to lane markers (measurement errors of 30 centimeters or less) (Figure 6).

This technology was found to reliably detect lane markers even using a wide-angle camera, and can use common drive recorder cameras to satisfy the requirements for lane-departure warning performance with low-cost equipment.

Fujitsu Laboratories aims to bring this technology into practical use in fiscal 2014 so that it can be used in lane-departure warning systems in drive recorders. Moreover, in addition, to its use in warning drivers as an enhancement to motoring safety, Fujitsu Laboratories is developing this technology for other applications, possibly including its use in analyzing operating risk from lane departures as captured by drive recorders.