Success in developing simulator that reflects the propagation process from a tsunami source area, contributes to the disaster resiliency of communities

Fujitsu Limited today announced that, based on its joint research with Tohoku University that began in 2012, the two have developed a 3D tsunami simulator that can replicate in fine detail the surge of water in urban areas as well as river surges caused by a tsunami. The joint research succeeded in combining a 2D tsunami-propagation simulation technology developed by Professor Fumihiko Imamura, director of the International Research Institute of Disaster Science in Tohoku University with Fujitsu's 3D fluid simulation technology. As a result, the researchers were able to accurately replicate the complex changes a tsunami undergoes as it interacts with coastal topography or buildings in urban areas, as well as the process of water surges in urban areas and rivers.

To apply the simulator toward composite disaster forecasting of a tsunami caused by a major earthquake, the researchers plan to use it in the Strategic Programs for Innovative Research (HPCI)(1), promoted by MEXT(2), in which one of the themes is improved tsunami forecasting techniques using the HPCI computer with the aim of helping make Japan more resilient to disasters.

The Great East Japan Earthquake of March 11, 2011, and the tsunami it caused devastated the Tohoku region. In light of this bitter experience, to implement effective measures that would minimize the damage cause by major earthquakes and tsunamis in the future, there is a great need to use large-scale simulation technology to elucidate the mechanisms behind the structural failure of buildings and for high-precision damage forecasting.

For that reason, in February 2012 Fujitsu began joint research with Professor Imamura of Tohoku University, who is Japan's preeminent tsunami researcher, to develop a high-precision 3D tsunami simulator.

Issues in the Joint Research

The 2D tsunami-propagation simulation technology developed by Tohoku University's Professor Imamura is widely used to calculate the arrival time and wave height of a tsunami along coastal areas. However, the problem was in being able to precisely replicate urban inundation and river surges; it was difficult to incorporate 3D data, such as the shapes of buildings or levees, which affect the power of the tsunami and the flow velocity of surges.

On the other hand, Fujitsu's 3D fluid simulation technology uses a smoothed-particle hydrodynamic technique(3) in which fluid is treated as a collection of numerous particles. This gives it the advantage of being able to replicate 3D behavior, such as that of wave breaks and overflow. The problem, however, was the very heavy computing load, making it difficult to perform simulations over a wide area extending from the tsunami source area to a coastal area.

Fujitsu and Tohoku University worked together to integrate the data on wave height and flow velocity replicated using the 2D tsunami-propagation simulation technology into the 3D fluid simulation technology. By combining these two technologies, the researchers developed a 3D tsunami simulator.

The action of the tsunami over the wide area extending from the hypocenter source to the coastal areas was replicated using the 2D simulation technology (figure 1 (a)), for which the computing loads are comparatively light, and the 3D fluid simulation technology was used just on the coastal regions and the urban areas, where such phenomena as wave breaks(4) and overflow occur, enabling the 3D movements of the tsunami to be replicated within a period of time that is reasonable for practical use. 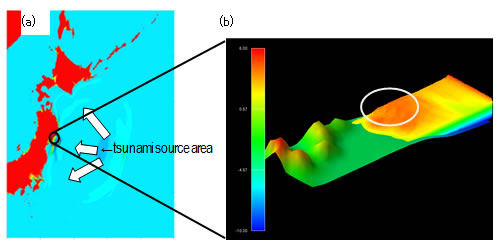 
With the 3D tsunami simulator, the complex flows of the tsunami from its hypocenter source, as well as the behavior of wave breaks and overflow on the coastal areas can be replicated. As a result, it is hoped the damage caused by the impact force of the tsunami as it launches up over the breakwaters and then crashes down will be able to be more precisely estimated.

For example, a simulation of a tsunami from its source area to urban areas on shore using only the 3D fluid simulation technology, would, even using a 10,000-node supercomputer system(5), require over 200 years to perform the calculations, making it infeasible. Using the newly developed 3D tsunami simulator, however, to precisely replicate an approximately 0.5m radius in a tsunami traveling over approximately 10 square kilometers, which is equivalent to one harbor or bay, would require approximately 160 hours of computing using a 10,000-node supercomputer. This therefore could be put to practical use as a solution that supports disaster mitigation efforts by forecasting the effects of measures taken to deal with tsunamis, such as by using coastal structures.

*Details of this technology will be announced by Fujitsu as well as Professor Imamura and Assistant Professor Daisuke Sugawara of Tohoku University at the 1st International Conference on Computational Engineering and Science for Safety and Environmental Problems (COMPSAFE 2014), which will be held April 13-16 in Sendai, Japan.

Going forward, as a step to applying this technology to damage forecasting in a complex disaster involving a major earthquake and associated tsunami, the researchers want to use it in the third of five fields of the Strategic Programs for Innovative Research, "Advanced Prediction Researches for Natural Disaster Prevention and Reduction," for the theme "Improvement of the tsunami forecasting system on the HPCI computer." In this research, a consortium of research institutes, led by Tohoku University, plan to integrate a variety of tsunami damage forecasting methods with evacuation simulations to yield highly precise damage forecasts that take complex factors into consideration. The goal of the research is to lead to the drawing up of a disaster mitigation plan modeled for western Japan. As part of those efforts, Fujitsu is planning to realize accurate tsunami damage forecasts that utilize the 3D tsunami simulator to predict tsunami behavior in fine detail, taking into consideration the three-dimensional force and behavior of tsunamis that occur in coastal and urban areas. Furthermore, based on the results of this research, Fujitsu aims to develop solutions that will support natural disaster reduction measures and be provided to the national and local governments. Through the provision of such solutions, Fujitsu hopes to contribute to urban planning that proves resilient to natural disasters.