Upgraded System will employ successor to the PRIMEHPC FX10

Fujitsu announced that it has received an order for a new supercomputer system from the Japan Aerospace Exploration Agency (JAXA). The core of the new system will be the successor model of the FUJITSU Supercomputer PRIMEHPC FX10, which is currently under development. The new system will have an overall theoretical peak performance of 3.4 petaflops(1), or 24 times that of the current system, which will ensure that JAXA has the processing capacity needed to analyze enormous volumes of data.

The new system will be deployed in phases, with a portion of operations beginning in October 2014, and full-scale operations expected from April 2016.

JAXA uses simulation technologies in a wide range of fields, including research into the fluidic, thermal, and structural characteristics of rocket engines and the aerodynamic noise of aircraft. However, along with an increase in the volume of data on simulations involving fluctuating conditions, such as turbulence and acoustics, there has been a need for processing performance to keep pace.

Fujitsu proposed the successor model to the PRIMEHPC FX10, which was subsequently selected for deployment, as it was recognized for having highly effective performance with JAXA's existing applications, as well as for its easy transition of assets, lower environmental impact and usability.

Features of the New Supercomputer System 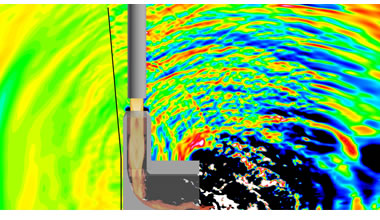 
The new supercomputer system will be built around a core of the successor model to the PRIMEHPC FX10. It will be a large-scale system with a theoretical peak performance of 3.4 petaflops, or 24 times the performance of JAXA's current system.


Currently under development, the successor to the PRIMEHPC FX10 is the next generation in the PRIMEHPC series. It uses the latest processor in the SPARC64 series that delivers 1 teraflop-class performance(2) with integrated Tofu interconnect, along with Hybrid Memory Cube (HMC)(3) high-performance memory, and other cutting-edge technologies.


The system will include a subsystem consisting of an x86 cluster with 160 FUJITSU Server PRIMERGY RX350 S8 units and servers for simulations using large-scale memory capacity, resulting in efficient and highly optimized computing environments that meet a variety of needs.

With the deployment of this supercomputer, JAXA will continue its pioneering computational research in the aerospace field. JAXA's projects will also benefit from more advanced numerical simulation technology and data analysis, with the system playing a key role in basic aerospace research.

The new supercomputer system is expected to be used for data-correction processing on images acquired from satellites, and should dramatically shorten the required processing time, which has consisted of several months up to now.