Fujitsu announced that it has completed building a supercomputer system ordered by the SPring-8 Center, a part of RIKEN, Japan's largest comprehensive research institution.

At the core of the new system is the FUJITSU Supercomputer PRIMEHPC FX10. Due to commence operation in April 2014, it will have a theoretical peak performance of 90.8 teraflops (TFLOPS) (1).

The RIKEN SPring-8 Center currently plans to use the K computer(2) to analyze the enormous volumes of data being generated by the SACLA X-ray free-electron laser(3), with the goal of understanding the structures and functions of nanomaterials.

The PRIMEHPC FX10 will be used to conduct preliminary analysis such as data screening prior to more detailed analysis by the K computer, as well as to develop analytical software in line with the characteristics of experimental data. This deployment is expected to improve the efficiency of data analysis performed with the K computer, thereby dramatically reducing the time needed for structural analyses of nanomaterials. It is also intended to help accelerate the generation of research results in the development of new materials and in the biotechnology field with potential industrial applications.

Background to Deployment of the New Supercomputer System 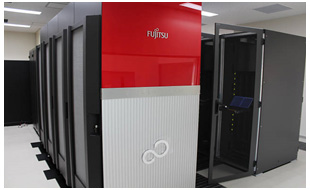 
SACLA uses the world's shortest-wavelength (0.06 nanometers) high-power X-ray laser beam with a 10-femtosecond (ten one-hundred-trillionths of a second) pulse to observe the ultrafast movements of atoms and molecules. This has revealed a world never seen before, showing the structures and characteristics of materials at the atomic and molecular levels.

SACLA generates enormous volumes of experimental data - as much as 100 terabytes (TB) per experiment - meaning detailed analyses require massive computing power, for which the K computer is expected to be used.


Overview of the New Supercomputer System

Key specifications of the new supercomputing system are as follows.

By creating an efficient way for SACLA to work together with the K computer, it should become possible to provide Japanese industry with the world's most advanced research infrastructure. It is anticipated that the system will contribute to innovation in a range of fields, such as with the development of pharmaceuticals and new materials, fuel cells and ultra-large-scale integrated circuits.

With more than 30 years of experience building and supporting high-performance computers, Fujitsu is providing total support to RIKEN's R&D and analysis projects.

Following the inauguration of SACLA two years ago, we have been able to run a variety of experiments on SACLA, which combines a state-of-the-art accelerator and optical technologies. The high stability realized at SACLA has contributed to achieving the high hit rates to samples, which produces a much larger volume of data than initially expected. Our biggest challenge at present is quickly analyzing the vast quantities of data being produced every day. The PRIMEHPC FX10 will dramatically shorten analysis times, and by promoting the combined usage of the K computer and SACLA, two of the country's most advanced research platforms, we look forward to bringing about innovations across a wide range of disciplines and industries.