Fujitsu today announced that it has integrated two systems managed by the Japan Meteorological Agency (JMA) – the Automated Data Editing and Switching System (ADESS) and the Disaster Mitigation Information Provision System. Fujitsu has also renewed the system platform. JMA has commenced delivery of data via the new system, having conducted a sequential switchover for data recipients in and outside of Japan on October 1, 2013 and again between February 3 and March 14, 2014.

ADESS, located in Kiyose City, Tokyo, is a critical system that plays a central role in exchanging meteorological data with national meteorological services in and outside Japan, and also functions to distribute JMA-produced disaster mitigation information to the network of administrative agencies and the media in Japan. Another important system, the Disaster Mitigation Information Provision System, provides warnings and emergency warnings relating to weather, tsunamis, and high tides, as well as information on the seismic intensity of earthquakes – collected from meteorological observatories across Japan – to government disaster management agencies and local governments throughout the country. Accordingly, to maintain stable operations in the event of a major disaster, JMA has since 2005 operated both of these systems in eastern and western Japan, in Tokyo and in Osaka, respectively.

Moreover, as observational data have become more sophisticated, and with improvements in forecasting precision, the volume of data JMA collects and distributes through the system continues to increase. To cope with this higher level of throughput, Fujitsu renewed the integrated system's platform. This has made possible stable processing performance and operational continuity even when there is a sudden surge in the volume of data required to be processed as a result of a natural disaster or other cause. 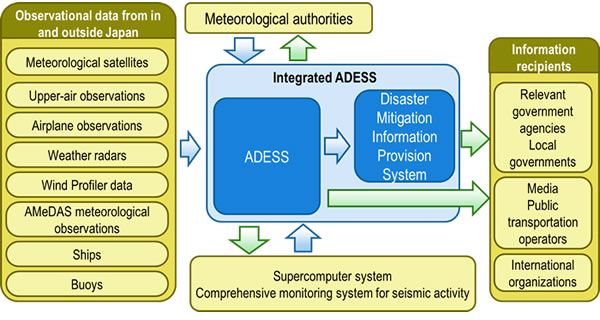 Japan is a country with frequent natural disasters, such as floods and landslides caused by typhoons or torrential rainfalls. Accordingly, when there is a risk of a weather-related disaster striking, to prevent or mitigate the damage it could cause, there is a need to quickly and reliably provide accurate and highly specific meteorological data, such as information on the severity of the phenomenon, or where and when it is likely to strike.

To meet these societal needs, JMA uses the Fujitsu-constructed ADESS to collect observational data from both in and outside of Japan and to disseminate meteorological data and weather warnings to government disaster management agencies and local governments as well as private-sector weather services.

Fujitsu has now integrated JMA's Disaster Mitigation Information Provision System to the ADESS site in Kiyose City, Tokyo in eastern Japan, which together with Osaka in western Japan make up the two ADESS locations. Fujitsu has also renewed the system's platform.

To accommodate ever-increasing data processing levels, as well as the increased scope of processing tasks and data to be processed resulting from integration with the Disaster Mitigation Information Provision System, it was estimated that over 100 servers would be required, and that the burden of systems operations and monitoring work would also increase. To lighten the burden, Fujitsu instead used FUJITSU Software Systemwalker, its integrated operations management middleware, to provide the five functions of integrated monitoring, job operations monitoring, performance monitoring, remote access operability, and resource distribution. Together with standardizing ADESS and Disaster Mitigation Information Provision System operations, visualization of transmission status of meteorological data and disaster mitigation information on a single screen enables centralized and streamlined systems operations and monitoring work.

To improve system reliability and operational continuity, JMA deployed Fujitsu's highly reliable UNIX servers, SPARC Enterprise M3000/M4000, and its ETERNUS DX80 S2 disk storage, both of which are ideal for mission-critical systems. FUJITSU Software PRIMECLUSTER, a highly reliable platform software was also deployed along with Systemwalker integrated management middleware, FUJITSU Software Interstage – a business application platform, and the FUJITSU Software Symfoware database software, all of which have track records of reliable performance over many years.

For the meteorological data JMA handles, such as weather forecasts, warnings, advisories, etc. there is a strong need for instantaneous transmission and the data needs to be as specific as possible. Moreover, as observational data have become more sophisticated, and with improvements in forecasting precision, the volume of data JMA collects and disseminates through these systems continues to increase. To transmit the information without delays, it is necessary to have superior server performance that can quickly process the data. By deploying Fujitsu's SPARC Enterprise M3000/M4000 servers, which use Fujitsu's multi-core multi-thread SPARC64™ processor, the systems are now able to achieve superior levels of performance.