Kawasaki and Tokyo, Japan, February 28, 2014 Fujitsu Laboratories Ltd. and Fujitsu Research Institute have today announced development of the first assessment tool from an ICT company that visualizes a community's characteristics from multiple perspectives, including the environment and economy.

Existing urban assessment tools can quantify environmental performance, infrastructure functions, and other factors. However, future assessments will need to be more comprehensive, especially for ensuring the sustainability of a community, and will need to take into account a region's particular attributes, including topography, population, and industrial areas.

Utilizing more than 1,200 categories of public data from government statistics and other sources, this project selected 50 items for evaluation related to the regional revitalization needed to create sustainable societies. These were chosen in accordance with quality of life and stability, safety and security, prosperity, and other factors for three regional revitalization policies, namely, the new benchmarks associated with the environment, economy and society. Based on these policies, the newly developed tool visualized the strengths and challenges of local communities by performing comparative assessments of local governments that share similar characteristics in terms of population, industrial structure, and other representative regional attributes.

Fujitsu Laboratories and Fujitsu Research Institute conducted field trials of the tool in cooperation with the town of Shichikashuku in Miyagi Prefecture. Based on the results, Fujitsu Research Institute proposed to Shichikashuku that a "forest and water experience project" and a "forestry, biomass, and solar power project" be taken as measures for a regional revitalization program.

Details of this technology are to be announced by Fujitsu Laboratories at the 9th Meeting of the Institute of Life Cycle Assessment, Japan, running March 4 – 6 at the Toyosu Campus of the Shibaura Institute of Technology.

As more and more of Japan's population move to the cities, birthrates decline, and the population gets older. Local communities in the country's mountainous regions are facing a number of challenges, including a labor shortage in agriculture and a growing number of unoccupied homes. Meanwhile, the cities are facing their own challenges as a result of their concentrated populations, including polluted air and the heat-island effect. Every local community has its own set of challenges, many of which are dependent on factors such as population, industrial structure, and location.

Efforts to promote industry as a means of local revitalization have been taken by many local communities, which sometimes produce success, but in other cases the expected results were not achieved. One of the reasons stated for lack of successful revitalization is that local communities could not make sufficient use of the resources at their disposal to meet requirements. Conversely, when areas have a high degree of similarity in their characteristics and challenges, the effect of the policy measures implemented can also be expected to be similar, so it is important to identify communities in the same category and understand what those characteristics are.

The typical methods for evaluating cities are to perform a general assessment of the environmental performance of its buildings or the city, or to assess the functionality of its infrastructure. These methods specify a city to be assessed and quantify it according to a number of predefined assessment criteria.

In building a sustainable society, however, it is important to revitalize the mountainous regions and farming villages, as well as to have such rural revitalization be linked to solving the problems of environmental pollution and population density that large urban areas face. Until now, there has been no way to clarify the value of a community in terms of its own attributes and characteristics.

This tool is used to establish the three policy categories of the environment, economy, and society, and as local revitalization policies, performs a general assessment from the perspective of a comprehensive evaluation that takes into account local attributes (Figure 1).

To extract assessment benchmarks, Fujitsu Laboratories objectively used more than 1,200 categories from public data, including published government statistics. It then selected 50 on which local revitalization policies are based and made these easy to quantify (Figure 2). 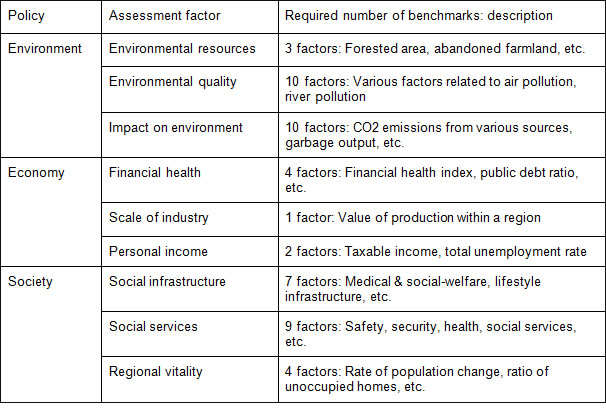 Figure 3: Screenshot of the assessment tool

Fujitsu Laboratories conducted a test assessment using this tool, with the cooperation of the town of Shichikashuku in Miyagi Prefecture (Figure 4).

Shichikashuku is blessed with forests and a manmade lake, and as such, Fujitsu has repeatedly studied proposals for regional revitalization that would make use of these abundant natural resources. The assessment results showed that, compared to other areas with similar populations and industrial structure, the town has strong finances and is well-administered. The town's finances being better than the national average was a new insight gained by comparing it with similar towns. It also showed a high value for the town's sewage-system, indicating that the social infrastructure was well-developed to preserve the water resources in the manmade lake.

Using these results, the Fujitsu Research Institute proposed a "water and forest experience project" and a "forestry, biomass, solar power project" as a plan to revitalize the town. 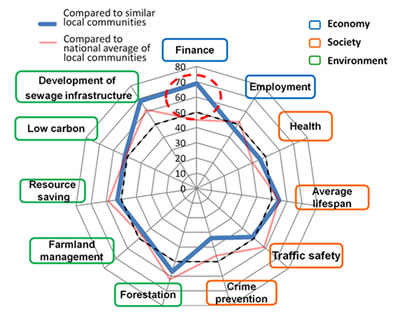 This tool can be used to evaluate public administrations, formulate overall planning or basic plans in the environmental or tourism areas, and to accelerate development of consulting leading to regional revitalization. Fujitsu Laboratories and Fujitsu Research Institute look forward to further opportunities to help build sustainable communities and revitalize regions using public data.