Tokyo and Kawasaki, Japan, February 24, 2014 Fujitsu Limited and Fujitsu Laboratories Ltd. announced development of a prototype tablet with a touchscreen that conveys a sense of slipperiness or roughness depending on the image being displayed. This new haptic, or tactile, sensory technology was developed by Fujitsu Laboratories.

Fujitsu will be exhibiting and demonstrating the prototype at the Fujitsu booth in Hall 5 at Mobile World Congress 2014, running February 24–27 in Barcelona. 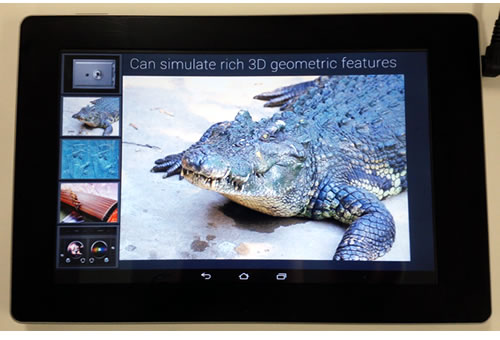 As the market for smartphones and tablets reaches maturity, customer priorities in terms of value are shifting away from specifications and functionality toward features that appeal to our senses and emotions, such as comfort and enjoyment. The Fujitsu Group has long worked toward developing products with a high degree of sensory value, primarily with technologies that offer enhanced visual and auditory features through the company's "Human Centric Engine" equipped on its smart devices. Now, by adding this tactile sensation feature, Fujitsu is offering customers a totally original experience that breaks new ground in usability and sensory expressiveness.

Inducing an ultrasonic vibration on the surface of the touchscreen display creates a high-pressure layer of air between the screen's surface and one's fingertip, which has the effect of reducing friction, creating a floating effect. Taking advantage of this phenomenon makes it possible to create a slippery sensation on a touchscreen display that had been previously difficult to achieve. While vibrations in the ultrasonic band require a significant amount of energy, Fujitsu has developed a technology that induces vibrations efficiently at mobile device sizes, and successfully produced a prototype that creates these tactile sensations.

2. A technology that creates a sensory illusion of bumpiness and roughness

This technology has been miniaturized and equipped on a prototype tablet which will be exhibited at Mobile World Congress 2014. Visitors can experience for themselves the tablet's tactile sensations, as well its visual and audio features, in the following four demonstrations.

- Japanese harp: Offers users the sensation of plucking the strings of a koto, a traditional Japanese harp.
- DJ: Mimics the sensation of moving a CD placed on a mixing deck, and using volume and other controls that feel as if they are sticking out.
- Vault: Gives auditory and tactile feedback as users rotate a combination lock to open a vault.
- Alligator: Touching the image of an alligator on screen will convey the sensation of the skin texture appropriate to the place being touched.

By enabling more realistic and intuitive operability, the tactile sensory technology in this prototype has wide-ranging potential applications, including for electronic product catalogs, on tablets and other devices, as well as potential applications for a variety of services. Fujitsu and Fujitsu Laboratories are continuing with R&D to extend the range of tactile expressiveness, with the goal of commercialization in fiscal 2015.