Tokyo, January 24, 2014 Fujitsu today announced that it has completed construction of a new computer system for the Institute for Cosmic Ray Research (ICRR) of the University of Tokyo. This x86 cluster system, forming the backbone for ICRR's research on cosmic rays(1), began operation on January 1, 2014.

The new system will store and analyze observational data on cosmic rays, which include protons, gamma rays, and neutrinos, and will be used for ICRR's various domestic and international joint research projects in astrophysics and particle physics.

Integer-math performance of the computation server is rated at 96,426 using the SPECint_rate2006 benchmark(3), about ten times the performance of the previous system. It also boasts a file server capacity of 4.4 petabytes, which is roughly 3.2 times more capacity than the previous system, and has a data-transfer speed of 18 GB/s, an approximately 30-fold improvement.

This Fujitsu system will support the KAGRA Project(4) and contribute to advances in other cutting-edge research in astrophysics and particle physics.

ICRR installed its first x86 cluster system in January 1991 as a collaborative research environment for multiple projects in the field of particle physics and cosmic-ray research, conducted primarily by the University of Tokyo. At locations both in and outside of Japan, ICRR has conducted research on high-energy cosmic rays, high-energy gamma rays, and neutrinos; for example, the Super-Kamiokande(5) Project has discovered neutrino oscillations and the Tibet AS-gamma Experiment used cosmic rays to observe the sun's cosmic-ray shadow(6).

Together with expanding its research in the fields of astrophysics and particle physics, ICRR plans to move forward on new experimental projects, such as the KAGRA project, which aims to detect the gravitational wave for the first time in history, and the ground-based gamma ray observatory, CTA(7), which is designed to help understand galactic and extragalactic very-high energy gamma-ray sources.

To meet the needs of these new projects, ICRR required a new computer system that could keep pace with dramatic growth expected in the volume of observational data and of analyses. It would be essential for the new system to boost analytical performance, have a greater storage capacity and to enhance data input and output performance.

To satisfy these requirements, the new system started with new hardware that has approximately ten times the integer-math performance of its predecessor, enough storage capacity to accommodate roughly six years' worth of observational data in cosmic-ray research, and the FEFS scalable file system to sidestep the bottlenecks created by centralized data I/O loads, all of which result in an efficient environment that enables more accurate research.

The new system offers two main functions: as a computation server that handles data analysis, and as a file server that stores observational data.

The new system will be used in ICRR's projects both in and outside of Japan, and will help illuminate the mechanisms underlying ultra-high energy phenomena such as where and how high-energy cosmic rays originate and accelerate, through deeper, broader studies of the cosmos. Furthermore, inquiries into the properties of neutrinos and into dark matter particles will lead to even further advances in the study of cosmic rays and particle physics. The world's first gravitational wave detections promise to reveal new aspects of the universe, bringing us closer to testing the theory of general relativity, and to probe the beginning of the universe.

Composition of the New System

ICRR will be the primary user of the new system for multiple research projects. 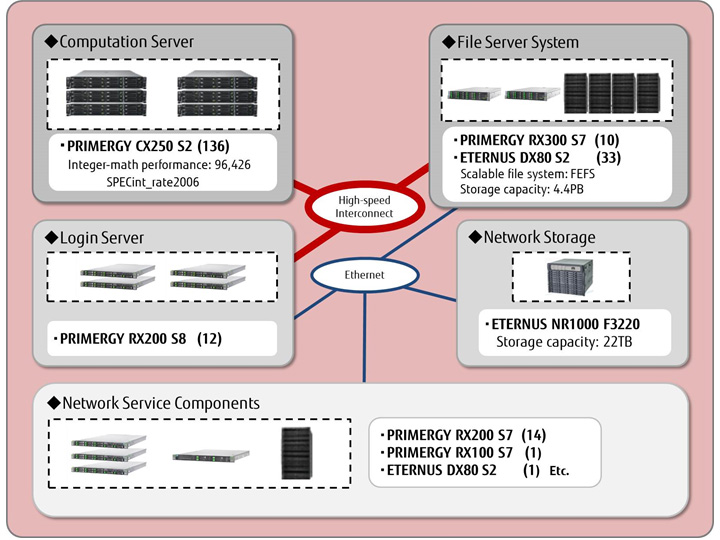 Figure 1: Composition of the New System

"At ICRR, we expect to begin many new research projects. Accordingly, it is anticipated that there will be a significant increase in observational data. To handle the storage and high-speed processing of this data, we needed to upgrade the performance of our computer system. In particular, our goal was to dramatically increase the speed of data transmission, and for a high-performance, highly reliable storage system that meets these requirements, we employed the Fujitsu FEFS file system. We expect the research groups using the computer system to announce many new observational results in the future that generate new insights into hitherto unknown phenomena relating to the universe and cosmic ray particles."