Use autonomous sensor-network technology to contribute to a safer, more secure society

Fujitsu Laboratories Ltd. and the Industrial Technology Research Institute (ITRI) of Taiwan today announced that they are collaborating in the field of disaster prevention to develop autonomous sensor-network technology that can communicate information between devices without human intervention.

While many parts of the planet are at risk from natural disasters, existing technologies for disaster mitigation and prevention, such as laser meters, have only been deployed over a limited area due to the cost of the equipment and the difficulty of maintenance.

The focus of the research collaboration is the application of disaster-prevention systems that use autonomous sensor-network technology. Fujitsu Laboratories and ITRI will work to develop technologies that will collect environmental data from a wide-area grid through numerous wireless sensors that are linked, so that even if some are knocked offline due to damage or insufficient power, the system as a whole can continue to operate. The partners are also constructing a test system, which will be field tested for disaster mitigation and prevention that targets landslides and avalanches.

Most of the Earth is affected by weather-related natural disasters, such as from storms and floods. Existing technologies for disaster mitigation and prevention relating to avalanches, in particular, include laser meters and high-precision strain gauges that are buried in slopes for underground measurements, both of which gather geological sensor data and analyze it for warning signs (Figure 1).

The expense of the equipment itself, however, combined with the difficulty of installing it, running cable and replacing batteries, has meant that these technologies have only been deployed over small areas, and the promise of effectively collecting data in a grid over a wide area has not yet been realized. 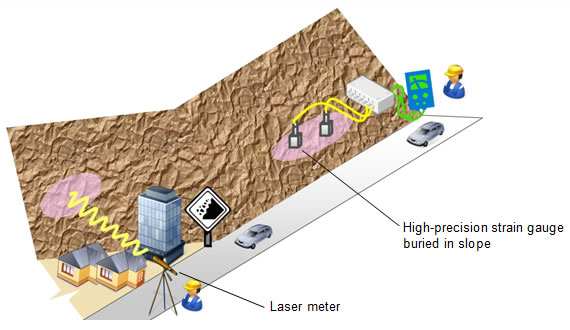 Fujitsu Laboratories and ITRI are developing technologies to collect data in a wide-area grid over an area to be monitored. Numerous sensors with onboard power generation will be linked wirelessly in an autonomously connected machine-to-machine (M2M)(1) network, creating a system that collects data in areas where avalanches are likely to occur (Figure 2). 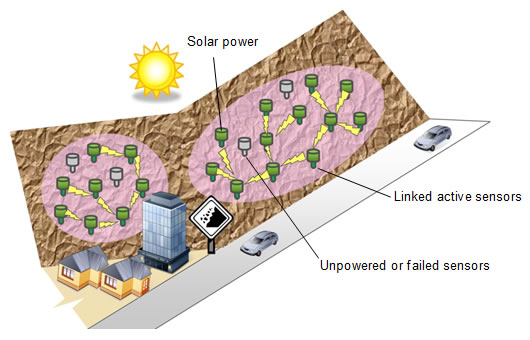 ITRI has primary responsibility for developing the sensor nodes, and is conducting R&D on sensors, communications networks, wireless software, and power control. Numerous sensor nodes will be placed in an area where avalanches are likely to occur, and data transmitted to servers will be analyzed with the help of civil-engineering specialists from local universities. Using its own solar antenna technology, the sensor nodes will have efficient communications and power-generation capabilities.

Fujitsu Laboratories' main area of responsibility is to develop the autonomous-control software for the sensor nodes, and conducting R&D on remote control and how to avoid errors in communications between sensors. Using distributed processing and embedded software it will create a system that allows adjacent sensors to be linked, while being able to tolerate noise in the wireless-communications channel and sensor failures. This will result in a robust system that can withstand the kinds of failures that climate change is likely to cause.

By combining the technologies that represent their respective strong suits, Fujitsu Laboratories and ITRI aim to establish the technology for autonomous sensor networks with potential applications that will ultimately extend beyond data collection and analysis systems for disaster mitigation and prevention, covering a broad array of applications.

About Information and Communications Research Laboratories

The major objectives of Information and Communication research include development of wireless multimedia system-on-chip technology, establishment of All-IP telecommunication application service and key technology, and early preparation of 4G Essential IP issues. Meanwhile, the development of wireless sensor network technology applications and e-Mobile services are steadily making progress so that users can soon benefit and enjoy the convenience of wireless digital life.

Industrial Technology Research Institute (ITRI) is one of the world's leading technology R&D institutions aiming to innovate a better future for society. Founded in 1973, ITRI has played a vital role in transforming Taiwan's industries from labor-intensive into technology-oriented. Over the years, ITRI has accumulated over 19,000 patents, cultivated more than 140 CEOs, and incubated over 200 innovative companies, including well-known names such as UMC and TSMC.
ITRI focuses on the fields of Information and Communications; Electronics and Optoelectronics; Material Chemical and Nanotechnology; Medical Device and Biomedical; Mechanical and Systems; and Green Energy and Environment. In addition to its headquarters in Taiwan, ITRI has branch offices in Silicon Valley, Tokyo, Berlin, Moscow and Eindhoven in an effort to extend its R&D scope and promote opportunities for international cooperation around the world.