The Fujitsu TC Cloud service is run on a system comprised of FUJITSU Server PRIMERGY CX250 S2/CX270 S2 x86 servers that deliver over 230 teraflops(2) of computing performance from more than 10,000 CPU cores and over 250 teraflops of GPGPU(3) acceleration, making it one of Japan's largest systems(4).

This service is scheduled to commence from January 1, 2014. As one of Japan's largest cloud-based HPC services, it is expected to provide a platform for Japan's drug discovery research.

As a cloud-based service, TC Cloud offers a large-scale computing environment without the power consumption restrictions that otherwise would be faced by the university. It also provides the same level of convenience as an on-campus research environment. Moreover, the level of computing resources can be flexibly upgraded in the future as the scale of the research expands.

As exemplified by this cloud service provided to RCAST, Fujitsu intends to expand application of TC Cloud in the field of drug discovery as part of its initiatives to promote health and wellbeing in society through the use of ICT.

Background to the Deployment

Employing computer-based in silico drug discovery techniques to develop pharmaceuticals, RCAST is pursuing research into breakthrough drug treatments for such indications as cancer and lifestyle diseases.

Researching new drugs for the era of personalized medicine requires both conventional physical testing as well as computer simulation technology to understand the behavior of proteins in the human body. Processing the huge volume of calculations generated through simulations has required a large-scale, high-performance computing environment. However, an issue that RCAST had to consider was the restriction on energy consumption within the University of Tokyo if it were to build its own research environment. Moreover, another issue was that RCAST hoped to flexibly expand its computing resources in line with the scale of future research needs. 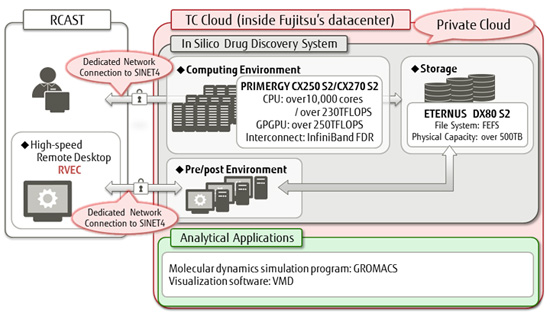 About the TC Cloud Service

To overcome these issues, RCAST decided to use a private cloud service that delivers one of Japan's largest simulation environments for in silico drug discovery.

The TC Cloud service has the following features.

Through the use of RVEC(7), a high-speed virtual desktop display technology that can display video as well as high-resolution images, the service enables input data preparation (pre-processing) from clients on the University of Tokyo's network and also enables remote visualization (post-processing) of simulation results.

For communications between the University of Tokyo and the Fujitsu datacenter, the service uses a high-speed dedicated network connected to the SINET4 Science Information Network(8).

RCAST is scheduled to start using TC Cloud from January 1, 2014. This service will provide an environment in which it will be possible to fully utilize simulations for in silico drug discovery research and the promotion of practical research, which in the past has been difficult due to the excessively long time required for simulations. It is therefore anticipated that this service will contribute to the discovery of new breakthrough drugs that had been difficult to develop using traditional experimental techniques. Moving forward, it is expected that joint research will be conducted together with pharmaceutical companies and others in the private sector, using the service as a platform for drug discovery research in Japan.

For its part, Fujitsu has world-class technology and talent in in silico drug discovery, ranging from theoretical to practical applications. By combining the expertise gained in the construction and operational support of this cloud service with its original small molecule drug design and evaluation technology(9), Fujitsu intends to expand the application of TC Cloud in the field of drug discovery as part of its initiatives to promote the health and wellbeing of society through the use of ICT.

Comment from Professor Tatsuhiko Kodama of the University of Tokyo's RCAST

"Improvements in computer performance have enabled detailed simulations of the in vivo effects of drug compound candidates. Through the deployment of one of the largest HPC cloud services in Japan dedicated to drug discovery, we will be able to use a simulation environment for accelerating the development of highly effective drug treatments. We seek to develop breakthrough drugs by leveraging this cloud service in combination with drug discovery research results that RCAST has accumulated."