Fujitsu today announced that Disney Mobile on docomo F-03F, its new smartphone, will be available exclusively in Japan as of December 13, 2013 from NTT DOCOMO, Inc.

The latest model comes preinstalled with 100 kinds of art content, based on the Mickey Mouse motif, which a team of artists created to bring the world of Disney to life in full color.

As an added service from Disney Mobile on docomo, customers can gain complimentary access(1) to over 30,000 videos, TV dramas, applications and other content on the Disney Market online store. The phone also comes with a cradle holder that is perfect for viewing photographs and Disney Cinema video content in full color on the phone's 4.7-inch OLED display, thereby providing users with an opportunity to fully enjoy the world of Disney.

Amid the growing popularity of smartphones, Disney Mobile continues to release captivating smartphones that have the new value to consistently garner the support of Disney fans and a wide range of other users. By leveraging the product ideas and technologies that Fujitsu has cultivated since the era of feature phones, the company has worked with NTT DOCOMO and Disney to develop a smartphone that delivers new value to the Disney Mobile series.

The phone also comes preinstalled with a host of exclusive content, such as seven kinds of colorful characters and Disney fonts, in addition to updated versions of the earphone jack accessory and cradle holder from previous models.

The F-03F features a full range of high-spec capabilities, including a 13.1 megapixel camera that is great for capturing night shots and illuminated shots; a 2,600 mAh battery enabling over two days(2) of battery life; 32GB of internal memory, which provides ample room for users to store a plethora of Disney content; and water-resistant technology(3), which even enables users to enjoy using the phone in the bathroom. Disney Mobile on docomo F-03F is available in three colors: White, Pink and Blue. 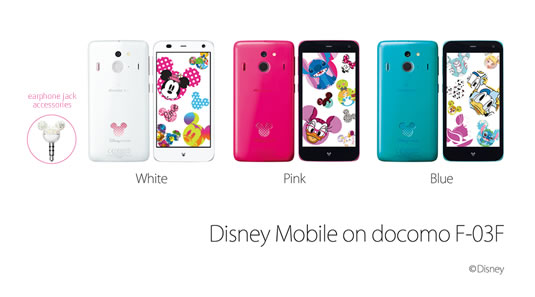 1. Brings the colorful world of Disney to life

The rear panel of the F-03F uses a pearl powder coating to deliver a glossy, dazzling finish in Pink, Blue or White. The rear panel's Mickey Mouse icon features a dotted gradation that gives an appearance of depth and transparency. Moreover, the accompanying earphone jack accessory is made of polarized pearl, which sparkles in the light, and when plugged into the handset, users can enjoy a different on-screen animation, selected at random from among four different colorful characters.

In addition to the exterior design, the games, apps and other content have been developed based on the concept of color. The phone comes preinstalled with artwork from 100 different artists that users can enjoy as live wallpapers or via the gallery app. Users can also create their own home screen wallpaper or alarm background in combination with photos they themselves have captured, contributing to the phone's rich library of artwork.

The phone's packaging and accompanying welcome card both feature the same kind of colorful artwork design. The welcome card comes with an augmented reality marker, and by pointing the smartphone's camera at the card, users can enjoy a special surprise performance.

Users can gain complimentary access to a wide range of content, including video content from Disney Cinema, such as Cinderella and Pocahontas(4), as well as a selection of programs from the BS 258 Dlife TV channel, which delivers popular overseas dramas and cartoons, including Desperate Housewives(5). Users can also download and enjoy their favorite content – such as live wallpapers, Deco-mail materials, Deco-mail pictograms and limited edition(6) Disney Mobile on docomo educational apps for kids – from Disney Market.

With the F-03F's 2,600 mAh battery, customers can use the phone for over two days(2) without worrying about battery life. The phone also supports high-speed recharging(7), which is convenient for quickly charging up the phone after forgetting to plug it into the charger the prior evening or to quickly top up the battery. Without the cradle holder attachment, the handset can be charged even inside a smartphone case(8), eliminating the hassle of having to remove the phone from your favorite case before charging.

Other popular features include a 2.2 GHz quad-core CPU, a switch-enabled fingerprint sensor, infrared communications, and Osaifu-Keitai®.

4. Greater convenience with Human Centric capabilities that only Fujitsu can offer

The smartphone is equipped with Super Clear mode, which automatically adjusts the brightness and contrast of the screen for optimal visibility – even if the display is under direct sunlight and difficult to read – and an engine that prevents the display from turning off while the phone is being held. Through features such as Touch Lock Mode, which temporarily blocks touch operations even if the screen is touched for easy viewing of videos with kids, the handset delivers a level of convenience only found with Fujitsu.

- Human Centric Engine is a registered trademark of Fujitsu Limited.- The preloaded content on this smartphone is provided by Walt Disney Company (Japan) Ltd. - All other company or product names mentioned herein are trademarks or registered trademarks of their respective owners. Information provided in this press release is accurate at time of publication and is subject to change without advance notice.