Fujitsu Laboratories Ltd. has announced the development of technology for software-defined networking (SDN) that controls storage-traffic routing and improves throughput on networks with integrated LAN and SAN(1) networks.

With an increasing priority on efficient system operations in datacenters in recent years, network switches are being controlled remotely and externally through software controllers, and such SDN technology that uses virtualized networks has come into use. In addition, there has been a trend toward integrating LANs and SANs to reduce costs and simplify operations.

Existing SDN technologies have been designed for LAN switches and cannot be used to optimize SAN storage traffic. When applied to converged LAN and SAN networks, this has created a barrier to performance improvements for attempting to expand systems.

Fujitsu Laboratories has equipped a network switch with the functions needed to control storage traffic, and by controlling that switch from the external controller, has made it possible to control the routing of storage traffic by SDN while effectively virtualizing network resources. A development environment for a LAN and SAN converged network using this technology has demonstrated that performance roughly doubled.

In the future, this technology will make it possible for systems to expand flexibly in response to loads on converged LAN and SAN networks in vertically integrated platforms for virtualization and cloud computing.

Details of this technology are being presented at Management of Emerging Networks and Services (IEEE MENS 2013), being held jointly with IEEE GLOBECOM 2013, opening December 9 in Atlanta in the US.

With the growing trend toward virtualizing servers and networks to reduce total cost of ownership (TCO) of datacenters, SDN networks, which control virtualized networks in software, are coming into use (Figure 1). At the same time, the application of technology that integrates LANs and SANs, which used to be deployed separately, into a single network is progressing, with the goal of reducing costs and improving the efficiency of operations management work (Figure 2).

Most SDN technologies, as typified by OpenFlow(2), control LAN traffic using Ethernet addresses or IP addresses, but cannot handle storage traffic, which does not use IP addresses. For this reason, storage traffic on converged LAN and SAN networks cannot be controlled, posing an issue for ensuring the efficient use of the network.

Fujitsu Laboratories has developed a technology that observes the flow of data for storage accesses, or storage flow(3) in a converged LAN and SAN network on FCoE(4) and controls storage traffic by SDN.

Key features of the technology are as follows (Figures 3, 4).

To allow for external control, storage-flow detection and storage-flow manipulation are split off from the functions needed for FCoE data relays and implemented in a prototype converged-fabric switch (Figure 3) created by Fujitsu Laboratories.

2. Applies a software-control interface to a centralized controller

Storage-flow detection and storage-flow manipulation can be controlled by an external controller.

Routing of storage traffic can be controlled externally when configured as shown in Figure 4. 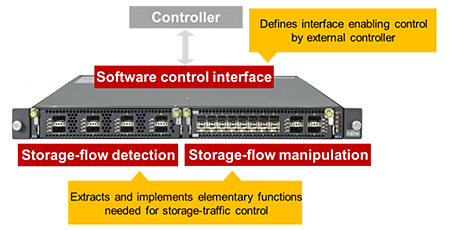 Applying this technology to an Ethernet-switch-based system resulted in an approximately twofold increase in throughput. Appropriately distributing data traffic allows for a system that can expand flexibly in response to network loads on a LAN and SAN integrated network.

This technology is expected to improve scalability and enable efficient network utilization in cloud systems, such as vertically integrated platforms for virtualization and cloud computing.

Fujitsu Laboratories is continuing research on efficient network utilization, including the storage-traffic control technologies announced here, with the goal of commercial implementations during fiscal 2014.