Resolve issues for the era of big data, delivering business innovation to customers

The new models feature a pluggable architecture that enables functionality to be added on within the same chassis as necessary, supporting the integration of storage environments that manage diverse data types and the enhancement of processing capabilities as businesses grow. This facilitates the efficient operation of implemented resources and the flexible expansion of functionality, thereby optimizing infrastructure investment.

In addition, with the combination of ETERNUS SF 16, internal storage resources can be automatically allocated according to business priority, freeing system administrators from complex storage-management tasks.

With the ETERNUS DX series and ETERNUS SF 16 software, customers can achieve continuity and efficiency, while facilitating operations management with ever increasing amounts of diverse data, thus helping them innovate more quickly.

Key Features of the New Models in the ETERNUS DX series 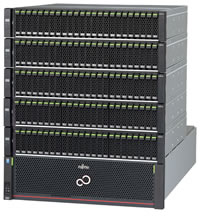 With a high-performance processor that supports multiple cores and multi-threading, four times more cache memory than previous models, the latest SAS3.0 drive interface, and support for a 16-gbps Fibre Channel connection(1), random-access performance is approx. five times as fast as previous models, making these systems among the fastest in the world. This gives them the flexibility to handle customers' new duties and increased throughput.

The change to a pluggable architecture, which offers flexible expandability and makes it easy to add-on functionality demanded of storage systems within the same chassis, means that both SAN and NAS storage domains can be accommodated in the same chassis. These typically had to be operated as separate installations. With multiple system environments coexisting in the same chassis, resources can be used more efficiently.

In addition, the ETERNUS DX500 S3 and DX600 S3 support large-capacity flash-based cache with built-in controllers. When expanding operations require higher performance, the typical response has been to add disk drives and review the data layout. Now, however, these needs can be met simply by adding flash-based cache to the controller unit at little cost and little installed space.

Furthermore, support for high-density drive enclosures that can house as many as 60 drives in one housing cuts by half or more the space requirements of large-scale configurations. In addition to conventional MAID(2) technology, a new function cuts power(3) to disks when they are not spinning, greatly reducing power consumption compared to previous models.

These improvements in space and energy efficiency help keep down operating costs for storage systems and datacenters and optimize the infrastructure investment required for managing massive volumes of data in the era of big data.

When used in combination with ETERNUS SF 16, which is storage management software with improved operations-management functions, these new storage systems gain support for quality of service(4) features that can automatically prioritize tasks that need higher processing speed. Simply setting a priority level in advance enables automated control of internal storage resources so that they are optimally allocated, greatly improving the system's utilization efficiency. Since the system can automatically control performance design and performance tuning, the workload of system administrators is dramatically reduced, freeing them from complex storage-management tasks.

Also, when combined with the ETERNUS SF 16, integrating a SAN storage domain and NAS storage domain into the same chassis helps make operations and management more efficient. Both the new models and the earlier ETERNUS DX S2 series support centralized management of multiple devices, as well as more fine-grained management features. Finally, support for virus-scanning engines has been added for improved security in the NAS domain.