Fujitsu Limited and Fujitsu Laboratories Ltd. today announced that they have developed an interference-simulation technology for millimeter-wave(1) radar, which is used in automotive radar(2) and other applications.

The 76-GHz millimeter-wave band has come into widespread use for things like motor vehicle radar, although the 79-GHz band is also expected to become popular for its higher resolution. But as radar systems become more widespread and more modulation types are used, there is a growing need to study in detail whether or not interference occurs. Because millimeter-wave radar uses a wide bandwidth, it has been difficult to perform analyses of interference from different modulation types with general purpose PCs using conventional approaches because of their limitations in processing performance. Now Fujitsu and Fujitsu Laboratories, by creating a mathematical model of these different modulation types that simplifies analysis without sacrificing precision, have developed simulation technology that can analyze interference on a typical PC with ordinary memory and performance levels.

This technology can be used in simulations when developing and testing interference-avoidance algorithms as a way of preventing object-recognition oversights and mistaken detections and developing more reliable automotive radar systems. This research was conducted through R&D to "Advanced Research on 79GHz-band Radar Systems", commissioned by Japan's Ministry of Internal Affairs and Communications for its "Research and Development for Expansion of Radio Wave Resources" program.

Millimeter-wave radar works by emitting radio waves in the millimeter band toward an object and using the reflected waves to measure the distance and speed of the object. In recent years, millimeter-wave radar in the 76-GHz band has become increasingly popular as automotive radar for detecting nearby obstacles and for implementing adaptive cruise control that responds to traffic conditions. It is also placed at crossings and along streets to detect hazards. Radar for monitoring infrastructure systems, such as traffic conditions, has also been commercialized.

To detect pedestrians and other small targets, however, there is a need to improve resolution. For this reason the 79-GHz band, which can achieve higher resolutions with a broader range of frequencies, is expected to become increasingly popular. In the 76-GHz band, continuous-wave modulation techniques, such as FM-CW radar(3), have been most commonly used, as they allow for simpler transceiver circuit designs. With the 79-GHz band, improvements in circuit technology and a wider frequency-band allocation lead to an expectation that spread-spectrum radar(4) will come into use. Because these various techniques for millimeter-wave radar are going to be used at the same time, there is a need for simulation technologies in order to study in detail whether or not interference will occur (Figure 1). 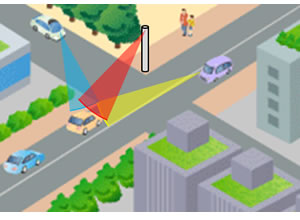 Millimeter-wave radar covers an extremely broad spectrum, from hundreds of megahertz to four gigahertz. The existing method for calculating interference between different radar techniques has required calculations across a wide band in minute frequency steps, which in turn requires that the computer running the calculations have considerable memory and processor resources—more than can typically be found on a desktop computer. An alternative method is to build test radars and discover the effects of interference experimentally, but because of the difficulty of performing tests that can accurately capture frequencies between radars and synchronize them in time, such experimental methods can only be used under limited conditions.

Now, by creating a mathematical model of interference in FM-CW radars and spread-spectrum radars that simplifies analysis without sacrificing precision, Fujitsu and Fujitsu Laboratories have developed a simulation technology that can analyze interference using a typical PC with ordinary memory and performance levels.

The existing method for calculating interference between different radar techniques has required calculations across a wide band in fine frequency increments, which makes analysis very time consuming. The frequency and time increments can be made coarser, but this results in less-precise analysis. In calculating based on a mathematical model, Fujitsu has been able to dispense with frequency components without affecting precision, and by calculating with the minimum necessary number of frequency and time steps, accuracy is maintained while achieving greater speed (Figure 2). 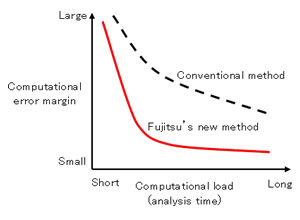 Figure 3 shows the results from simulating the effect of FM-CW radar on spread-spectrum radar. Where there is no interference, an object was detected only at the distance where it was present. Where there is interference, objects were detected at two distances where none were actually present, indicating error in detection. It is likewise possible to simulate the effect that spread-spectrum radar has on FM-CW radar. These interference effects can be easily calculated using typical PCs. Furthermore, it is easy to vary the parameters of each type of radar (frequency, modulation scheme, modulation width, and timing) and calculate the effects that these changes have on interference. 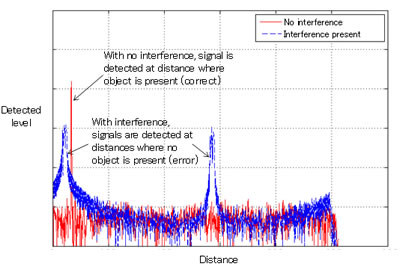 This technology makes it possible to quantitatively calculate to what extent and under what conditions interference occurs between different types of radar. Also, because it can be used in simulations when developing and testing interference-avoidance algorithms, highly reliable automotive radar systems can be expected to be developed to prevent object-recognition oversights and detection errors.