Fujitsu today announced that, as part of the continuous efforts of the FUJITSU Big Data Initiative announced this June to organize the company's lineup of big data-related products and services, it will be launching today a menu of ten offerings for presenting optimal ways in which big data can be used to address customer business challenges. The new offerings announced today have been developed based on scenarios from the Japanese market. Fujitsu will be releasing additional offerings in the future that meet the needs of the global market.

These offerings, made up of proposal materials and implementation models, were drawn up from approximately 200 big data utilization models Fujitsu has used to support its customers. Of which ten types were identified as being particularly highly-demanded by customers. As a result, for customers who are exploring the use of big data, Fujitsu can employ these offerings to offer implementation strategies and gauge the impact of the solutions' deployment, thereby enabling customers to quickly take action.

In addition to preparing a delivery organization for implementing the new offerings, as well as training programs aimed at developing the expertise of employees in the use of big data, Fujitsu will be holding a second recruitment round in January 2014 for collaborations with startups following a successful first round this past August, which resulted in collaborations with six companies.

Going forward, Fujitsu will continue to offer a comprehensive portfolio of big data products and services based on the FUJITSU Big Data Initiative while helping to aid customers and society in accelerating innovation.

Big data was initially leveraged as part of cutting-edge initiatives for use in generating new business opportunities and for use in new fields, such as social innovation. However, with smart devices becoming ubiquitous and with the development of advanced sensor equipment, it has become possible to utilize a wide range of data generated from on-site locations. As a result, big data is now beginning to be recognized as a realistic solution for addressing the challenges customers face in streamlining existing business processes and improving accuracy.

On June 24, 2013, Fujitsu unveiled its FUJITSU Big Data Initiative, through which it focuses on organizing its lineup of big data-related products and services, together with putting into place a support system for customers, partners and startups. With the gap between the expectations for big data and the realization of these expectations now being bridged, Fujitsu has developed ten new offerings and will implement a delivery system for providing these offerings, along with training programs for educating personnel and a second application round for its support program for startups. Fujitsu worked to discover highly marketable utilization scenarios through its portfolio of approximately 200 big data utilization models. The company has organized these scenarios into a total of ten offerings, broadly categorized into four themes. By delivering these offerings as implementation models that combine Fujitsu's services, products and unique technologies, the company will assist customers in selecting the optimal big data application to meet their needs while also ensuring results. 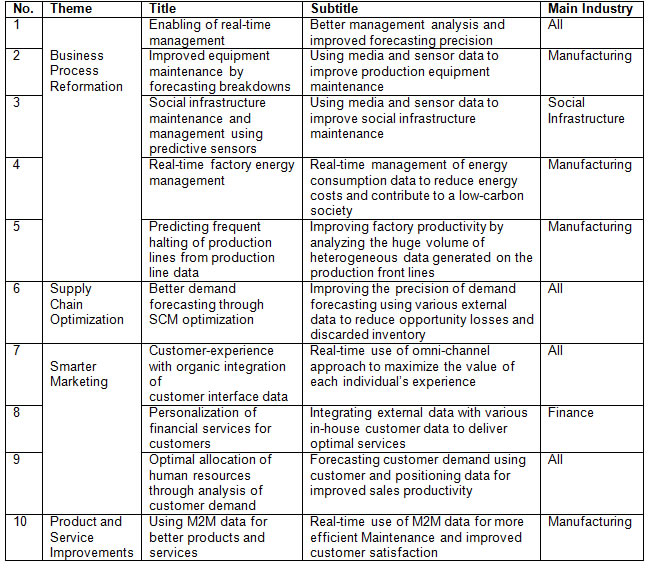 To deliver implementation models for the new offerings, Fujitsu is allocating 200 people from its 800-person Big Data Initiative Center, which supports the use of big data, to work in teams that make proposals for each offering. This, in turn, will enable a unified approach to customer consulting and proposals, as well as actual big data utilization. 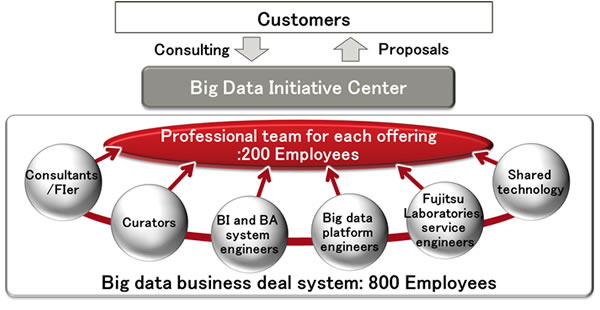 Figure 3: Overview of the professional teams for each offering at the Big Data Initiative Center

In implementing big data utilization, the lack of personnel with business knowledge, analytical ability, and IT skills has been an issue for companies. In response to this, Fujitsu is now offering a big data training course to continuously support the HR development of its customers to resolve this issue.

As part of the Fujitsu Big Data Initiative, in August 2013 Fujitsu began a limited-time recruitment period for its Support program for startups, which aids startup companies that are developing new services using big data. Currently it is collaborating with six companies. A second recruitment period will begin in January 2014, and Fujitsu will collaborate with startup companies to uncover new possibilities for big data.