Fujitsu today announced that, from October of this year, the availability of its STYLISTIC S01 smartphone for seniors has been expanded to 250 Orange retail locations with Service Counters across France(1).

Fujitsu plans to continue exploring opportunities to introduce the smartphone in other countries.

Background to the Expansion and Business Overview 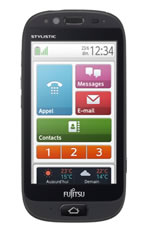 The STYLISTIC S01 offers all the power of a smartphone with an ease-of-use that makes it accessible to everyone. Thanks to the technologies and expertise Fujitsu has cultivated since 2001 when it first released the Raku-Raku Phone series in Japan – where over 20 million units have been sold – the STYLISTIC S01 has garnered high praise from seniors and other customers due to its ability to eliminate potential difficulties that inexperienced users typically encounter with a smartphone.


The STYLISTIC S01 has become popular because of its user-friendly functionality such as a unique technology that requires the user to apply pressure to the touchscreen, simulating the feeling of pressing a real button. The intuitive interface with large tactile buttons features distinct colors and large letters to facilitate operating and reading on the handset. Another reason for the handset's popularity is the fact that it is waterproof(2), a feature uncommon outside of Japan.

The STYLISTIC S01 also offers an emergency buzzer(3) that triggers a loud alarm when the user pulls a tab on the back of the smartphone. This alerts people in the surrounding area in emergency situations and also automatically dials a call and sends an SMS with the smartphone's GPS location to one, two or three pre-registered contacts. The STYLISTIC S01 smartphone is also equipped with innovations that improve listening comfort:

In addition, the smartphone's exclusive online community, known as Forum, is accessed by 62% of users and has attracted considerable interest for its cooking and health pages, among others.

Going forward, the two companies will broaden their support for seniors while further strengthening this business.

Main features and specifications of the STYLISTIC S01