In Japan, 40,000 head of cattle have been entered into the GYUHO SaaS system that makes use of bovine behavioral characteristics, specifically the fact that cows walk more when in estrus, thereby enabling ranchers to encourage mating when the pedometers they are wearing detect increased walking. This, in turn, makes it possible to breed with greater insemination success rates.

This service has been in operation at farms throughout Japan - in Hokkaido, Kumamoto, Miyazaki, Kagoshima, and Okinawa - since 2012. Following field trials in South Korea, the service launched commercially there in March 2013, and it is currently in use at three cattle farms in the country.

GYUHO SaaS is slated to begin field trials in Europe and Australia during 2013 and early 2014. Going forward, Fujitsu aims to further expand its deployment and have the service cover 500,000 cattle over the next three years to support livestock breeding and bovine health maintenance worldwide.

Given the recent spike in the price of livestock feed, the emergence of cheaper imported beef, and other issues, cattle ranchers are finding themselves beset by an increasingly difficult market environment, making efficient operations more important than ever. For livestock breeders in particular, the ability to accurately ascertain when cattle are in estrus and receptive to mating is indispensable for increasing productivity. This is extremely difficult for ranchers, especially when they are dealing with a high number of cattle or need to assess breeding receptivity in the middle of the night.

GYUHO SaaS utilizes a pedometer to track bovine activity, specifically the fact that cows walk more when in estrus. The system compiles this pedometer data in the cloud via the Internet, and then analyzes it at a datacenter to detect signs of estrus and automatically notify the rancher. Without creating any additional work for the rancher, this reduces the likelihood that signs of estrus will be overlooked, increasing the rate of successful mating and improving ranch efficiency.

With the addition of GYUHO SaaS to the Akisai food and agricultural cloud series, Fujitsu looks forward to wide-ranging international sales starting with Europe and Australia, in addition to Japan. GYUHO SaaS marks Akisai food and agricultural cloud's first foray into international markets, and through its deployment, Fujitsu hopes to help enable a future in which food is abundant, safe, and reliably available.

With GYUHO SaaS, pedometers are attached to female cows, and each cow's step counts are periodically collected and analyzed in Fujitsu's cloud. Over the Internet, ranchers can view graphs displaying cow behavior in one-hour increments, and data on behavior indicative of estrus are automatically sent to a pre-registered e-mail address that can be viewed over a mobile phone or other device, so that breeding opportunities are not overlooked. The system can also be used to preselect the sex of calves. Based on past results, calves' sex can be selected, with approximately70% accuracy, by timing the breeding to before or after the optimal timing of insemination, which is about 16 hours following the start of estrus. This system can be used in all aspects of livestock raising, including pasturing and industrial farming, and can function on a global scale. 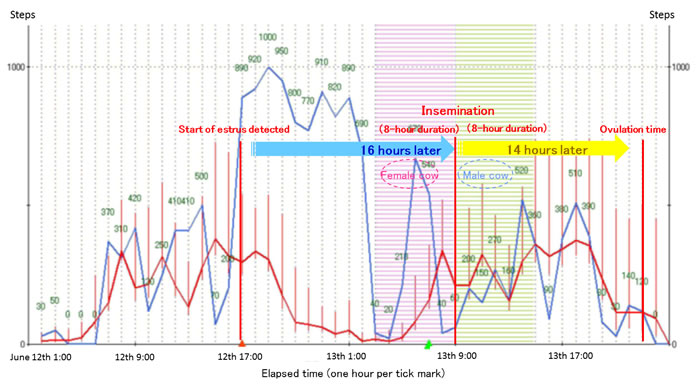 All company names mentioned herein are trademarks or registered trademarks of their respective owners. Information provided in this press release is accurate at time of publication and is subject to change without advance notice.