Fujitsu Limited and Fujitsu Laboratories Ltd. today announced that they have developed a low-noise signal-generating circuit(1) that can be used in automotive radar(2) and other millimeter-band(3) transceivers.

In recent years, to enhance the resolution of radar and expand the capacity of wireless communications, efforts have been focused on developing transceivers operating in the millimeter-band frequency range above 30 GHz. To raise the performance of millimeter-band transceivers and be able to produce them in mass quantities, it is necessary to use silicon-based semiconductors rather than the compound semiconductors(4) that have been used up until now. The problem, however, has been the difficulty of generating low-noise signals in the millimeter band.

Fujitsu has now developed a low-noise signal-generating circuit which consists of multiple comparators for operating sequential comparisons to reference signal. In doing so, they succeeded in reducing unwanted noise in the millimeter-band signal by 5 dB, to roughly one-third of previous levels, paving the way for the production of fully integrated millimeter-band transceiver circuits implemented on silicon semiconductors.

This technology is expected to make a significant contribution to raising the performance – and enabling the mass production – of automotive radars and other millimeter-band transceivers. A portion of these results were obtained through "Advanced Research on 79GHz-band Radar Systems," a research program commissioned by Japan's Ministry of Internal Affairs and Communications as part of its "Research and Development project for Expansion of Radio Spectrum Resources".

Details on this technology will be announced at the European Microwave Integrated Circuits Conference 2013 (EuMIC 2013), which opens October 6 in Germany.

In recent years, to enhance the resolution of radar and expand the capacity of wireless communications, efforts have been focused on developing transceivers operating in the millimeter-band frequency range above 30 GHz. For the high frequency integrated circuits (ICs) used to send and receive millimeter-band signals, compound semiconductors, whose physical properties are well-suited to high frequency applications, are being used (Figure 1). To integrate the features of a signal-processing circuit on a single chip, raise its level of performance, and enable it to be mass manufactured, however, silicon is more suitable than compound semiconductors (Figure 2). That is why research efforts have focused on creating millimeter-band transceiver ICs using silicon semiconductors. 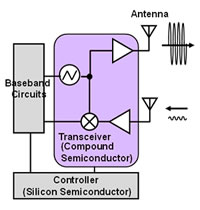 The newly developed technology employs a new architecture in which multiple phase difference detection circuits and delay circuits are connected in a line, enabling multiple comparisons to be made. In the new circuit, the frequency of the comparison signal is raised and, furthermore, the reference signal is split into multiple signals, enabling multiple comparisons per cycle. A phase difference signal is generated from each comparison, and because there are now more differential signals, their relative size, in relation to the noise generated by the phase difference detection circuit, is now larger, thereby enabling a reduction in the impact of the generated noise. Signal noise was successfully reduced by 5 dB below previous levels, resulting in approximately just one-third of the previous noise level.

The use of these technologies paves the way to the production of millimeter-band transceiver ICs implemented on silicon semiconductors. Accordingly, they are expected to make a significant contribution to raising the performance – and enabling the mass production – of automotive radars and other millimeter-band transceivers. Moreover, because the lower noise reduces electricity consumption and lowers the number of parts needed in a radar, they also will contribute to reducing burden on the environment.

All company names mentioned herein are trademarks or registered trademarks of their respective owners. Information provided in this press release is accurate at time of publication and is subject to change without advance notice.