In home wireless environments, this technology will enable high-resolution video streams and allow applications such as online games to run smoothly.

Details of this technology will be presented at the 24th Annual IEEE International Symposium on Personal, Indoor and Mobile Radio Communications (PIMRC2013), opening in London on September 8, 2013. 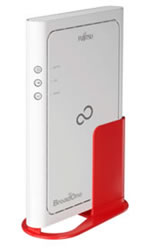 
1. Nearby femtocells interfering with a femtocell connected device

In this case, the communications speed of a device connected to a femtocell is reduced because of radio waves from another nearby femtocell.

2. Nearby macrocell base stations interfering with a femtocell connected device

In this case, the communications speed of an indoor femtocell connected device is reduced because of radio waves from a nearby macrocell base station.

3. Nearby femtocells interfering with devices connected to macrocell base stations

In this case, the communications speed of a device connected to a faraway macrocell base station is reduced because of radio waves from a nearby femtocell.

Fujitsu developed technology that enables the femtocell to detect its surroundings and automatically adjust the timing, transmission power, and transmission frequency band of its communications to reduce all three types of radio wave interference. Specifically, it manages interference through the sequence described below.

The femtocell collects information on devices connected to it, surrounding macrocell base stations, macro base station connected devices, and other nearby femtocells.

Based on the information on surrounding macrocell base stations, the timing of the femtocell's signal transmissions are set in accordance with the timing of the signal transmissions of the surrounding macrocell base stations. As a result, interference in control channels and data channels are separated so as to diminish control channel interference.

Based on the information about the devices that are connected to it, when communications quality is compromised the femtocell can increase the transmission power of the control channels in order to maintain control channel quality. This stabilizes the device connections. Although femtocells cannot be subject to meticulously predetermined positioning requirements or parameter adjustments, a femtocell with this technology significantly improves indoor communication speeds and prevents them from adversely affecting other nearby outdoor mobile users. Accordingly, in home wireless environments, this technology enables high-resolution video streams and also allows applications such as online games to run smoothly.

Fujitsu will proceed with verification testing of the features and functions of this interference control technology with the aim of actual implementation in fiscal 2013.

Fujitsu Laboratories of America, Inc. is a wholly owned subsidiary of Fujitsu Laboratories Ltd. (Japan), focusing on research on Internet, interconnect technologies, software development and solutions for several industry verticals. Conducting research in an open environment, it contributes to the global research community and the IT industry. It is headquartered in Sunnyvale, CA. For more information, please see: www.fla.fujitsu.com