Fujitsu today announced the development of a new technology for simulating magnetization reversal(1), and has used the K computer(2) to perform huge calculations to successfully conduct the world's first simulation of the magnetization-reversal process in a permanent magnet. This opens up new possibilities in the manufacture of electric motors, generators and other devices without relying on heavy rare earth elements(3).

The process of magnetization reversal has been a subject of scientific study, but the huge volume of calculations required to accurately model magnetic materials has made it difficult to simulate that process.

Fujitsu developed a magnetic simulation technology that combines a finite-element method(4) with micromagnetics(5). This technology makes it possible to compute magnetization processes of magnetic materials with complex microstructures on a nanometer (nm) scale, which is many times smaller than conventional technology can manage, by executing enormous computations on a supercomputer using a massively parallel computing technique.

Simulations of magnetization reversal in rare-earth magnets using this technology were performed on the K computer(6) in cooperation with Japan's National Institute for Materials Science (NIMS). On September 5, the results of this simulation are being presented jointly by Fujitsu and NIMS at the 37th Annual Conference on Magnetics in Japan being held at Hokkaido University.

Efforts to improve the efficiency of electric motors, generators, and other devices that use magnets are gaining increasing interest. Hybrid vehicles and electric vehicles both use rare-earth magnets containing heavy rare earth elements in their motors, but there is a growing tendency to avoid the usage of these elements due to resource concerns. This is why it is so important to develop powerful magnets using new materials and to understand magnetic-domain structures(7) (Figure 1) as a stepping stone toward the development of new magnetic materials.

This newly developed technology will be used to simulate the magnetization reversal of rare-earth magnets. Using a polycrystalline model (Figure 1) of a rare-earth magnet, the model is divided into extremely small regions of 1 nm. In so doing, it is possible to calculate the behavior of magnetic transition regions called domain walls (Figure 2). This simulation can also analyze the movement of domain walls and the propagation of magnetization reversals, which is difficult to perform with other simulation technologies. 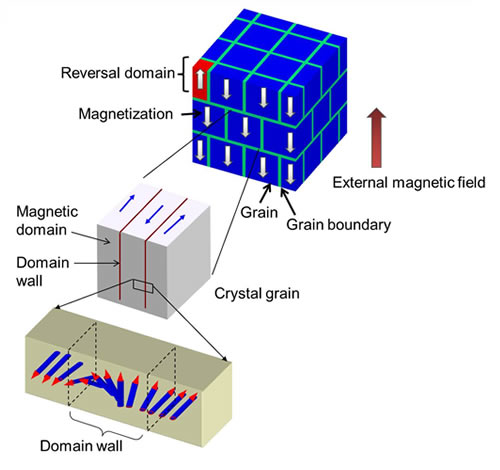 In collaboration with the Elements Strategy Initiative Center for Magnetic Materials (ESICMM) at NIMS (supported by the Japanese Ministry of Education, Culture, Sports, Science, and Technology's "elements strategy project"), Fujitsu will perform ultra-large-scale computations on the K computer and develop a "multi-scale magnetic simulator" that brings micromagnetics together with material design based on first-principle electronic structure calculations(8).