Enabling a sustainable world and society through the power of ICT

Fujitsu today announced that it has issued the English language version of its Fujitsu Group Sustainability Report 2013, which discusses the approach, initiatives and accomplishments of the Fujitsu Group's CSR and environmental activities

In pursuing its vision of a Human Centric Intelligent Society, the Fujitsu Group seeks to leverage the power of human-centric ICT to drive social innovation that will enable the resolution of society's challenges. With this year's theme of "The Power of ICT for sustainability and beyond," the Fujitsu Group Sustainability Report features case studies of ICT applications that address societal issues, initiatives to enhance global CSR management, and dialogues with key CSR experts about global issues. It also reports the medium-term CSR activity targets set for fiscal 2020 and the Fujitsu Group's accomplishments during fiscal 2012. With regard to environmental initiatives, one of the company's priority areas, the report covers examples of how the Fujitsu Group has contributed to the environment through the delivery of ICT, as well as major environmental performance achievements in fiscal 2012, including the company's contribution to a cumulative 15.61 million tons of CO2 emission reductions (from fiscal 2009 to fiscal 2012).

Overview of the Report

This section describes the Fujitsu CSR Policy, enacted in December 2010, the five priority issues around which efforts are organized, the FUJITSU Way, which lays out the Fujitsu Group's philosophy and principles, and the organization for putting CSR into practice.

It also summarizes how ICT can contribute to "solving social issues through business operations," one of the key issues in the Group's CSR Policy, while identifying future concerns and the Fujitsu Group's "Three Powers of ICT," which will enable the resolution of these concerns. 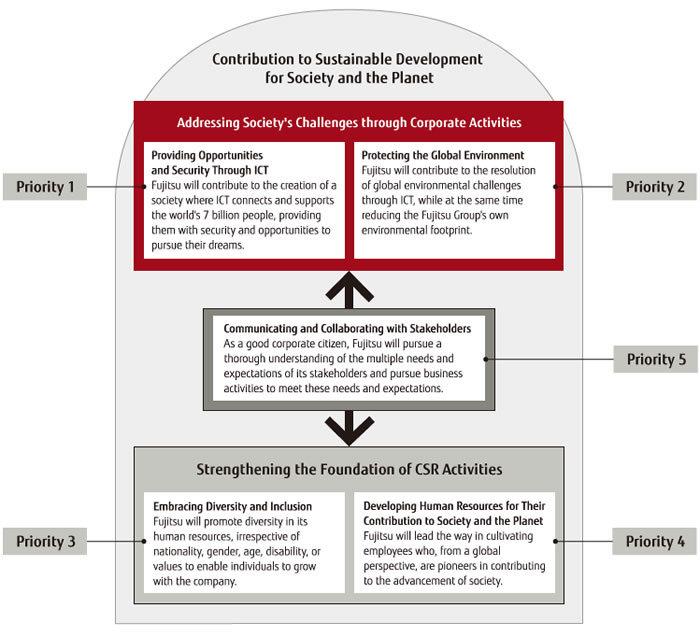 1. Providing opportunities and security through ICT
This section describes a number of case studies in Japan and around the world in which ICT has been used to address sustainability issues. These case studies are observed in light of the Three Powers of ICT - the Power to Shape the Future, the Power to Provide Equal Opportunities to All People, and the Power to Support Safe and Secure Living.

3. Embracing diversity and inclusion
Since fiscal 2011, Fujitsu's diversity promotion activities have been aimed at "understanding and practice." This section introduces specific examples of these activities, including support for even greater participation by female employees and help in balancing work and nursing care responsibilities.

4. Developing human resources for their contribution to society and the planet
This section details the Fujitsu Group's global human resource development, which aims to nurture employees who can support a truly global ICT company through a wide range of training programs targeting staff at all levels within the company, from business leaders to younger employees.

5. Communicating and collaborating with stakeholders
This section features initiatives with customers, business partners, shareholders and investors, and global and local communities, as well as dialogues with key CSR experts.

6. Targets and achievements in CSR activities
The report describes Fujitsu's medium-term CSR goals for the target date of fiscal 2020, as well as goals for fiscal 2013 and results from fiscal 2012.

To ensure the reliability of its content, important environmental and company performance data contained in the Fujitsu Group Sustainability Report 2013 [Detailed Version] has undergone third-party certification by Ernst & Young Sustainability Co., Ltd. An Independent Assurance Report will be published along with the sustainability report in September. This report will also be posted to Fujitsu's website.