Fujitsu today announced that its new Raku-Raku Smartphone 2 F-08E will be available in Japan from NTT DOCOMO, Inc., from August 16, 2013.

In addition to coming equipped with the latest 1.7 GHz quad-core CPU and other technologies used in Fujitsu's flagship models, the new smartphone is powered by NTT DOCOMO's ultra-high-speed Xi ("crossy") communications network, and features next-generation WhiteMagic™ energy-efficient LCD technology. The new display can reduce power consumption by up to approximately 50%, improve the brightness of the display making it easier to see in difficult viewing conditions, such as outdoors on a sunny day. It also features a new Raku-Raku Touchscreen(1) that even further emulates the feeling of pushing real buttons on a conventional mobile phone. The result is significantly improved readability and ease-of-use.

Fujitsu has also revamped its Raku-Raku Community, an Internet service that lets customers enjoy discussing their interests and popular topics, and has added new group features, as well as expanded communications capabilities so that members can exchange messages. By offering a service that helps people build new relationships through smartphones, Fujitsu is providing customers new ways to enjoy their lives. 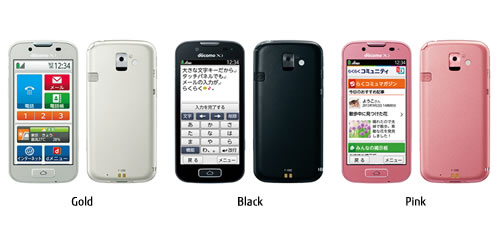 Interest in smartphones among senior citizens is rising with the rapid growth of the smartphone market. With Raku-Raku Smartphone 2, after thoroughly studying and analyzing feedback from users of the original Raku-Raku Smartphone launched last year, Fujitsu has made roughly 600 improvements to the phone's user interface, including enhancing the touchscreen's touch sensation and employing display technology that enables further improvements in power consumption and clarity. This has made the handset extremely user-friendly, as well as coming equipped with cutting-edge technologies. The new smartphone is available Gold, Black and Pink.

Fujitsu has enhanced the Raku-Raku Touchscreen, which can accurately differentiate between a finger stroke and a tap. By improving the touchscreen's tap detection sensitivity through a newly developed IC chip, a 1.7 GHz quad-core CPU, and a specialized vibration processor, the handset's vibration processing time has been accelerated. As a result, the phone responds to softer taps, and the tactile feedback users receive when pressing the screen is significantly improved. In particular, when inputting multiple characters of text in a row when composing an e-mail message, the phone's operations feel much more like pushing buttons on a conventional mobile phone.

Raku-Raku Smartphone 2 employs next-generation WhiteMagic™ energy-efficient LCD technology, which can reduce power consumption by up to approximately 50%. Furthermore, by adding white pixels to the existing RGB pixels, the display can achieve up to roughly 900 cd of luminance, making it much brighter and easier to see in scenarios where screen visibility has previously been hindered, such as outdoors on a sunny day.

Fujitsu has revamped its Raku-Raku Community, a service that lets members enjoy discussing their interests and popular topics with a wide range of other members. In addition to previous bulletin boards in which members can communicate with multiple users at once, the updated service includes a "Circle Hiroba" space where groups of users with shared interests or goals can come together. Two new group features have been added, including Personal Groups, where users can communicate among particular acquaintances, such as family members and close friends, and Raku-Raku Community Groups, where users can comment on the topics of the day, as well as freely take part in photo contests and other events.

Fujitsu has also expanded the Raku-Raku Community's communications capabilities to enable members to directly exchange messages between each other. Users can insert preloaded illustrations when posting or commenting on the bulletin boards and groups, as well as share their excitement or appreciation for an article with the simple touch of the "applaud!" button.

The new smartphone's high-performance 8.1 megapixel camera is equipped with an "Exmor RS® for mobile" back-illuminated CMOS sensor, along with the "Milbeaut® Mobile" image processing engine that incorporates a wide range of photographic capabilities, including high-sensitivity capturing and noise reduction. Moreover, with a simple press of the shutter button, users can capture a beautiful shot whenever they wish, without having to make detailed changes to the settings depending on the subject or scene.

The smartphone is equipped with a high-volume combination speaker/receiver on the front of the handset. The receiver is positioned in a convenient location, making it easy to align with one's ear and ensuring a high level of audibility when having a conversation.

In addition, by placing the high-volume speaker on the front of the phone, it is easier to listen to when watching TV or listening to the radio. The phone also features SUPER HAKKIRI VOICE 4, which makes it easier to hear the other caller's voice in a crowded environment, as well as other audio correction features from previous models including Echo Cut, AWASERU VOICE ®2, and YUKKURI VOICE.

6. Preinstalled with a host of applications

Raku-Raku Smartphone 2 comes preinstalled(2) with a host of applications that can be fully enjoyed even by first-time smartphone users, including fun games and often-used convenient applications. These applications can be used immediately without the need to download or register for an account.

The scope of the new smartphone's text-to-speech capabilities, a familiar feature of the Raku-Raku series, has been significantly expanded, including support for website text narration, a highly requested feature. In addition to text-to-speech functionality, Raku-Raku Smartphone 2 supports a variety of gesture operations that makes it highly convenient.