Fujitsu today announced that Disney Mobile on docomo F-07E, its new smartphone, will be available exclusively in Japan as of July 31, 2013 from NTT DOCOMO, Inc.

With an easy-to-carry form factor that can be comfortably held with a single hand, F-07E features a 4.7-inch display and a Disney-themed design adorning the handset's rear panel. In addition, shining lights illuminate the body of the phone when a phone call or e-mail is received. The accompanying Mickey Mouse and Minnie Mouse earphone jack accessories light up in tandem with the phone's interface and rear panel illuminations, and when plugged into the handset, users can enjoy a surprise on-screen animation.

As an added service from Disney Mobile on docomo, customers can gain complimentary access(1) to all of the video, TV drama and application content on the Disney Market online store. The phone also comes with a cradle holder that is perfect for viewing Disney Cinema and other videos, thereby providing users with an opportunity to fully enjoy the world of Disney.

Disney Mobile on docomo F-07E was designed with the aim of immersing fans in the magical world of Disney through the wonder of light. Building on this concept, the rear panel of the smartphone features 23 LED lights, which can sparkle in a variety of colors and patterns, including pixie dust and a castle. By creating their own custom arrangement of over ten thousand different colors, users can configure the castle to light up in a personalized manner when receiving a phone call, and the earphone jack accessories light up when inserted into the handset or cradle holder.

The phone also comes preinstalled with a host of exclusive content, such as a sparkling Tinker Bell character and live wallpaper, as well as the popular Tokyo Disney Resort® Wait Time Navigator app.

The F-07E features a full range of high-spec capabilities, including an easy-to-use 13.1 megapixel camera that can capture bright, vivid photographs; 64GB of memory, which provides ample room for users to store their favorite Disney content; and water-resistant technology(2), which enables users to enjoy the phone even while taking a bath. Disney Mobile on docomo F-07E is available in three colors: Pure White, Light Pink and Night Blue. 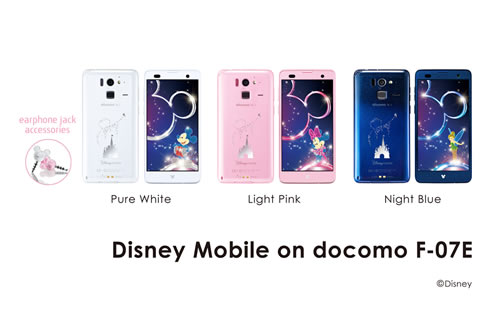 1. Brings the world of Disney to life

With the castle illumination on the rear of the phone, one of the F-07E's stylish design features, users can create their own color design from among over ten thousand different colors, in addition to choosing from among seven varieties of light schemes. A hidden Mickey Mouse character, which is only revealed when the phone lights up, provides users with a true experience of the world of Disney. When either of the accompanying Mickey or Minnie Mouse earphone jack accessories is plugged into the handset, a special movie that corresponds to the character will play. Moreover, after setting the preinstalled Disney Light Art live wallpaper as the phone's desktop screen, either Mickey or Minnie will come to life as part of the wallpaper, depending on which accessory is plugged in. The earphone jack accessory illuminates when plugged into both the cradle holder and phone, making mixing-and-matching accessories an even more fun experience.

The phone's packaging and accompanying welcome card both feature the same kind of illumination design. The welcome card also comes with an augmented reality marker, and by pointing the smartphone's camera at the card, users can enjoy a special surprise performance. The F-07E is packed with other Disney-inspired design elements down to the details, including the phone's lock screen and incoming call screen.

Users can gain complimentary access to a wide range of content, including special video content from Disney Cinema, including Pirates of the Caribbean: Dead Man's Chest(3), as well as a selection of programs from the BS 258 Dlife TV channel, which delivers popular overseas dramas and cartoons, such as Desperate Housewives(4). In addition to the 25 varieties of preinstalled wallpapers, users can download and enjoy their favorite content—such as live wallpapers, Deco-mail materials and Deco-mail pictograms—from Disney Market.

With the F-07E's high-capacity battery, customers can use the phone for two days straight(5) without having to worry about battery life. The smartphone also supports high-speed recharging(6), which is convenient for quickly charging up the phone after forgetting to plug it into the charger the prior evening. Other features include a switch-enabled fingerprint sensor, support for One-Seg broadcasts, infrared signal, and Osaifu-Keitai®.

The smartphone is equipped with features such as Reduced Blue Light Mode, which reduces the intense brightness of blue light emitted from the screen, and Super Clear mode, which automatically adjusts the brightness and contrast of the screen for optimal visibility, even if the screen is under direct sunlight and difficult to read. It also loaded with other convenient support features, such as On When Held, a feature that enables the smartphone to detect that it is being held, based on orientation and motion, thereby preventing the screen from going into sleep mode, and Flip to Switch Ring to Silent Mode, which immediately turns off sound and vibration(7) alarms when the user simply flips the device over.

- Human Centric Engine is a registered trademark of Fujitsu Limited.- The preloaded content on this smartphone is provided by Walt Disney Company (Japan) Ltd. All other company or product names mentioned herein are trademarks or registered trademarks of their respective owners. Information provided in this press release is accurate at time of publication and is subject to change without advance notice.