Fujitsu today announced that it is integrating its internal Oracle database platforms using UNIX Server SPARC M10 (sold as Fujitsu M10 outside of Japan) and the Oracle Database 11g.

This move is intended to consolidate database-server operations, improve availability(1), and lower total costs. The changeover will be gradually rolled out beginning in late September.

In addition, the expertise in large-scale database integrations gained through this process will serve as a reference model for Fujitsu engineers, further elevating the company's technological prowess and enabling Fujitsu to offer optimal proposals for customers facing similar issues.

Up until this point, each department within Fujitsu, such as production management, procurement, distribution, and general affairs, handled their own database server deployments. As a result, there are now many different database software versions and an assortment of server types within the company. This greatly increased the cost of backups and disaster preparedness and created various service level problems in operations management.

Spurred by the Great East Japan Earthquake to address this issue, Fujitsu began to consider its options for integrating its database platform, and now has begun to build a database services platform that can be used throughout the company.

Platforms that had been using Oracle databases will standardize on Oracle Database 11g. The database platform will be integrated using a combination of UNIX servers and x86 servers, each used to match certain database utilization conditions.

For UNIX servers, Fujitsu will use the SPARC M10 which comes equipped with the new SPARC64 X CPU developed by Fujitsu. It has come to be regarded as one of the easiest general-purpose UNIX servers to run, thanks to the following features.

Since this integration consolidated different systems with different configurations, it required the flexibility to gradually improve capacity, the performance and integration ability to achieve large-scale integration, and high transferability to cut costs. The SPARC M10 was chosen as the one server capable of satisfying all these conditions.

Oracle Exadata(4) has been chosen as the storage system for the x86 servers. Oracle Exadata is a dedicated database machine optimized for Oracle databases, with high performance in batch/OLTP operations.

Both of these hardware platforms are being installed separately at remote locations in the primary-use environments as well as the disaster recovery(5) and development environments. In addition, data synchronization is handled by Oracle Data Guard(6), which is designed to work at critical moments and to unify levels of operation. 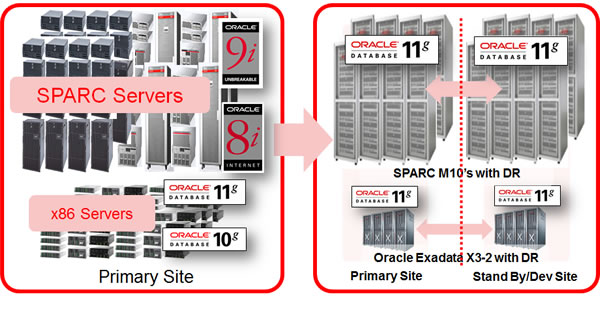 "We are very pleased Fujitsu is consolidating its Oracle Database infrastructure on Oracle Exadata and SPARC M10 systems. As a global information technology leader, Fujitsu's choice is a gratifying endorsement of the value of engineering hardware and software together," said Oracle Chief Corporate Architect Edward Screven.