Fujitsu Laboratories Limited today announced that it has developed a platform technology for Infrastructure as a Service (IaaS) for on-demand physical servers that are configured to a user's needs and can be provided in ten minutes. This technology is the first of its kind in the world.

Currently, physical IaaS, or physical server-hosting services, which provides physical servers installed in a datacenter, requires that the service operator manually install and configure servers at the customer's request, leading to a lag time of several days between the time when a customer orders new servers and when the servers actually go online. The new technology makes use of another Fujitsu Laboratories innovation, called "Resource Pool Architecture"(1), which makes it possible to configure physical servers on-demand and instantly respond to customer orders.

This technology gives customers the ability to quickly bring high-performance physical servers online and instantly change hardware configurations, enabling greater flexibility in changing server numbers or the performance of individual servers to respond to changes in application loads. This also means that physical IaaS will have the benefit of the same sort of easy on-demand configurability that virtual IaaS have already offered. Through automation, the service provider can improve hardware resource utilization which will lead to reduced operating costs.

Fujitsu Laboratories is beginning internal trials of this technology in July 2013, and will conduct additional R&D with an eye toward further enhancing cloud services.

With physical IaaS, service operators need to install servers and configure software manually. This typically results in a lag of several days between the time when an order for servers comes in from a customer and when those servers actually go online. This lack of on-demand access has been a weak point for physical IaaS as compared with virtual IaaS.

Fujitsu Laboratories developed "Resource Pool Architecture," which pools the various individual hardware resources dispersed throughout a datacenter—including CPUs, memory, and disk storage—and brings them together as part of an architecture created within a physical server.

The Resource Pool Architecture uses a disk area network as a high-speed interconnect to connect the CPU and memory pool with the disk storage pool, making it possible to configure on-demand physical servers. 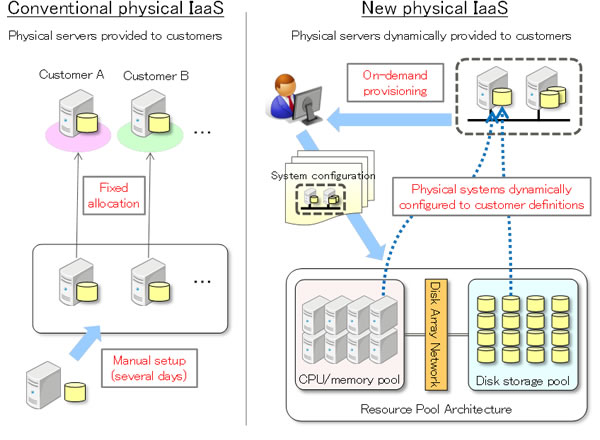 This new technology, which currently exists in a prototype implementation, is a platform for physical IaaS, and combines Resource Pool Architecture with FUJITSU Software ServerView Resource Orchestrator(2), cloud-platform management software. Some of its key features are as follows.

This configures physical servers according to the customer's order using Resource Pool Architecture, assigns fixed information (such as MAC addresses and BIOS settings), and provides them to the customer on-demand. Local disks and other optional configuration factors can be added to these servers on-demand as well.

Fujitsu Laboratories conducted a test of this technology, and was able to create a hardware resource pool of 48 servers and 512 hard disk drives and solid-state drives, configure physical IaaS systems from this pool, and provide physical servers to users, including operating-system installations, in as little as ten minutes.

This new technology brings to physical IaaS the same easy on-demand access as virtual IaaS, reducing the time it takes to provide and configure physical servers from several days to about ten minutes. Customers quickly get access to high-performance physical servers and can instantly reconfigure them. They can also change the number of servers they have online and the performance of the servers themselves in response to application loads using physical IaaS in an on-demand time frame as is already available for virtual IaaS. Through automation, the service provider can improve hardware resource utilization which will lead to reduced operating costs.

Fujitsu Laboratories is beginning internal trials of the newly developed platform technology for physical IaaS in July. During this time it will study functionality and performance, and conduct R&D on ways to raise cloud services to a higher level.