Fujitsu Laboratories Limited today announced the development of a high-speed thin client gateway technology that allows existing web applications for PCs to be quickly displayed in the same way on smartphones, tablets and other smart devices (Figure 1). The technology even permits smooth control of software via a mobile communications environment (3G/WiMAX/LTE).

Previously, correctly displaying application interfaces designed for PCs on a smart device has required the interface to be converted into a format supported by smart devices. However, with thin client systems that transfer unmodified screen data to a smart device, specialized server installations and system deployments have been necessary. In either case, when utilizing the technology in a mobile communications environment, data (packet) loss often occurs which diminishes usability.

Fujitsu Laboratories has therefore developed a gateway technology that allows for easy access to existing business systems and reduce the volume of transferred screen data to a tenth of previous levels. By deploying gateways that incorporate the new technology, business applications can be utilized on smart devices without requiring modifications to existing business systems that have been developed for PCs.

As a result, users will be able to employ a variety of smart devices, including personal devices they may own and use at work as part of a BYOD (Bring Your Own Device) policy. They will be able to access existing internal business applications (sales, customer support, etc.) that are designed for PCs, and to smoothly view e-learning video content intended for viewing on company PCs.

With the rapid spread of smart devices in recent years, together with faster mobile communications speeds, the use of smart devices in mobile network environments for business tasks has become increasingly prevalent in a wide range of industries. BYOD, in which employees use their personal smart devices for work, continues to attract interest for its ability to reduce equipment and communications costs while driving improved productivity by allowing employees to use the devices they are familiar with. Thin client systems are gaining attention for enabling business tasks to be executed via smart devices because they allow users to remotely control applications simply by sending screen data to the devices. This means no data is stored on the device’s internal memory thereby preventing the risk of data leaks due to lost devices and other incidents.

Using business applications on a smart device in a mobile environment leads to the following problems.

Generally speaking, web-based application interfaces that have been designed for PCs employ HTML scripts and other features to enhance the visual appearance of the interfaces. At the same time, there are features that are not supported by existing smart device web browsers, leading to times when things displayed correctly on a PC cannot be done so on a smart device. As a result, developers have had to create application interfaces for each type of smart device OS that differ from the interface for PCs.

When rendering an application interface coded in HTML on a variety of different smart device web browsers, there are often differences in how the interface is displayed depending on the type of OS. One way to address this problem is by using a thin client system that transfers images of the application interface to a smart device. This approach has required administrators to install specialized server (screen forwarding server) software onto desktop PCs where the business applications reside, in addition to having to deploy a thin client system.

Running software that relies heavily on complicated graphics and high-resolution images, such as video applications, requires tens of megabits per second of bandwidth capacity per client. In a mobile network environment, this often leads to data (packet) loss, resulting in an extremely poor user experience for business applications on smart devices.

Fujitsu Laboratories has developed a high-speed thin client gateway technology that enables users to securely and comfortably work using their smart devices without having to make any modifications to existing business systems. Key features of the new technology are as follows (Figure 2).

Fujitsu Laboratories has developed a high-speed thin client gateway technology that acquires screen data using the HTTP protocol, which is generally used for web-based business applications, as well as remote desktop protocol (RDP)(1), which is used in remote desktop tools for desktop PCs. Together with a mechanism that performs authentication and session management for each user, the technology then converts the data in real time to Remote Virtual Environment Computing (RVEC) protocol(2) which enables efficient transmission of screen data, then sends it to the user’s smart device. As a result, it is possible to securely utilize internal company applications on smart devices in a mobile network environment, all without leaving any data on the device and without having to make any modifications to existing web-based business systems. 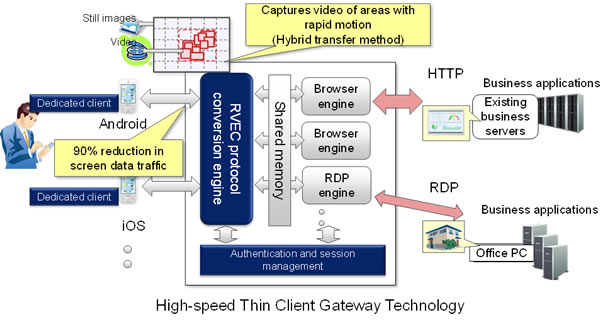 Figure 2: Features of the new technology

Fujitsu Laboratories has further improved the performance of the technology it announced in fiscal 2012(3) and has incorporated it into the new high-speed thin client gateway technology. As a result, for applications with quick screen refresh rates, the technology is able to employ a hybrid still video and still image transfer method to enable a 90% reduction in screen data traffic compared to conventional RDP technology (according to Fujitsu research). This, in turn, improves the usability of applications in narrowband mobile network environments that are subject to relatively high latency.

The new technology will enable a variety of smart devices to access existing internal business applications (for sales, customer support, etc.) that are designed for PCs. Users will also be able to smoothly view e-learning video content intended for internal company PCs (Figure 3). 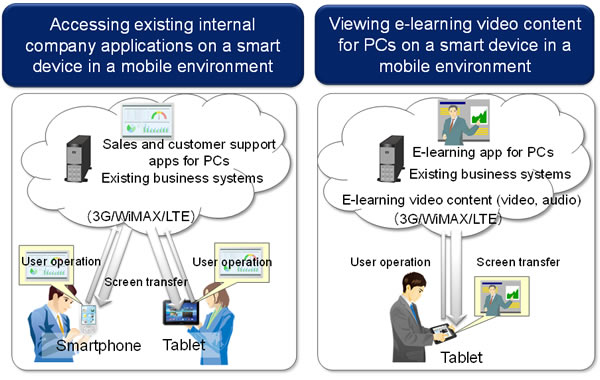 Going forward, the technology is expected to be commercialized as part of network service products from Fujitsu. Starting in summer 2013, the technology will be incorporated into a solution from Fujitsu Network Solutions Limited to transform employee work styles. The solution will be available in Japan only.