Fujitsu Laboratories Limited today announced the development of a gallium-nitride(1)HEMT(2)-based transceiver module technology that features an output of 10 W and operates at frequencies up to the millimeter-wave(3) band.

Until now, developing high-output modules that operate in the millimeter-wave band has required modules consisting of separately packaged components to allow for sufficient heat dissipation. As a result, it has been difficult to produce compact modules. In addition, because the occurrence of signal loss tends to increase in internal module terminal connector components at higher frequencies, reaching millimeter-wave operations has proved to be challenging.

Using the new technology, it is possible to combine multiple chips within a single unit, thereby enabling the development of more compact radar devices and wireless communications equipment.

Details of the new technology will be presented at the IEEE MTT 2013 International Microwave Symposium (IMS2013), to be held beginning June 2nd in Seattle, Washington.

Gallium nitride (GaN) is used as a material in blue LEDs. Compared to the conventional semiconductor materials of silicon (Si) and gallium arsenide (GaAs), GaN features a high electron transfer rate and relative resistance to the breakdown caused by voltage. Given these characteristics, GaN HEMTs—or transistors that use GaN—show promise for high-output, exceptionally efficient operations.

In line with the advancement of a network-based society, radio wave demand in a variety of wireless systems is expected to increase even further. For example, in the field of smartphones and other wireless communications, there is a shortage of available frequencies. Using millimeter waves to accommodate this increase in demand is being given consideration. Likewise, aircraft currently employ the 10 GHz frequency band, but a move toward usage of higher frequencies is expected to take place in the future.

Current generations of high-output millimeter-wave transceiver modules consist of separately packaged transmitter and receiver components. Being able to integrate both functions in a single unit, however, will enable equipment to become more compact. 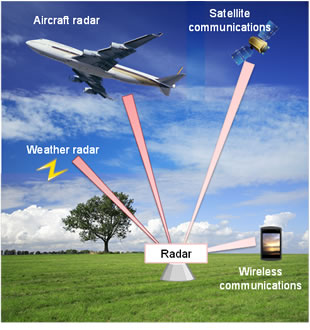 Moreover, it is also necessary to reduce signal loss in connector components. This is because, at higher frequencies, loss increases in the components connecting the chip and the wiring that transmits a signal.

Fujitsu Laboratories has developed a compact, high-output transceiver module that uses GaN-HEMT and operates in the millimeter-wave band. The key features of the technology are as follows:

Fujitsu Laboratories devised a wideband connector structure that reduces loss at higher frequencies in the heat sink. With the new connector structure, high frequency signals passing through the module can be transmitted at up to 40 GHz, two times the frequency levels of previous designs.

Using the newly developed technology, it was possible to shrink the size of the millimeter-wave transceiver module to 12 mm × 36 mm × 3.3 mm, measuring less than 1/20 the size of previous combined unit configurations. 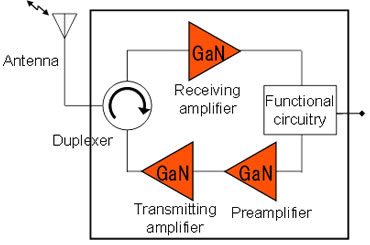 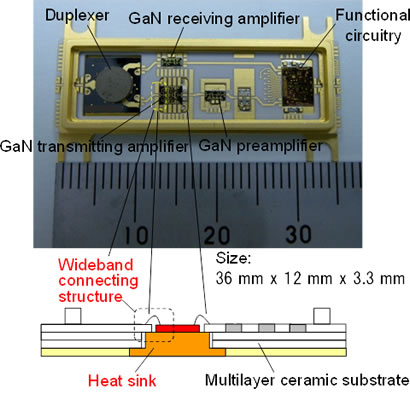 Figure 3: Photo and structure of the millimeter-wave GaN transceiver module

This new technology will make it possible to achieve high-output transceiver functionality with a single unit, thereby leading to improved performance and more compact and lighter equipment for wideband communications and radar systems.

Fujitsu Laboratories plans to put this technology to use in a wide range of applications that require compact modules with high output across wide bandwidths, including wireless devices and radar systems.