Fujitsu today announced that it is providing Fujitsu Ubiquitous Services Karada Life Walking Support to Ohtawara City in Japan's Tochigi Prefecture. This service will support the city's health promotion plan called "Ohtawara's three million steps to encourage walking," which will commence in May 2013.

Karada Life Walking Support uses the Smartphone Pedometer(1) application developed by Fujitsu, as well as related system information, to effectively and continually promote better health. The system uses each participant's own smartphone to automatically log distance walked, and then graphs the results. It also offers fun ways to encourage people to keep walking, such as by tracking the distance walked as a virtual walking tour around famous locations in Ohtawara City or along the journey that the 17th-century haiku poet Basho recounted in his famous work, "The Narrow Road to the Deep North."

To control rising medical costs(2) as Japanese society ages and becomes more susceptible to lifestyle-related diseases, the Health Promotion Act passed in 2002 calls on municipalities to set up their own health promotion programs. This has been handled in a variety of ways around Japan, but walking is an easily accessible activity that has been especially popular as a way to promote and maintain health, and walking as a habit is taking off among the middle-aged and elderly.

Furthermore, many cities are taking action to avoid future increases in medical and nursing costs by sponsoring walking events, but these are imperfect solutions in that only the people who are interested in walking take part, they are short-term measures that rarely become habits, and they require high administrative overhead with benefits that are difficult to quantify. In an effort to resolve these issues, Fujitsu provided the Ohtawara city with Karada Life Walking Support to be used with an application that people can run on their own smartphones.

1. Makes it easy for a wide range of citizens to take part

People simply install the Smartphone Pedometer application developed by Fujitsu on their own smartphones to turn any walk into an enjoyable event. This lowers the barrier to participation so that more citizens will take part.

2. Effective in turning walking into a habit

People using the application can track distance walked in the form of a virtual walking tour that takes them either around Ohtawara's major destinations or other famous places throughout the country such as along the journey the poet Basho recounted in "The Narrow Road to the Deep North" and the picturesque vista points along the East Coast of Japan known as "The 53 Stations of the Tokaido Road." The system also motivates participants by showing their ranking on a leaderboard, which encourages citizen participation as well as walking as a habit.

In addition to instilling walking as a habit, this encourages citizen health without any special events sponsored by the city. This lowers administrative overhead and also quantifies the number of participants and their daily exercise status to visualize and eventually improve citizen activity levels and health.

People download the Smartphone Pedometer application and simply by carrying their smartphones, they automatically record the number of steps taken every day. They can also enter their weight and blood pressure, look back on their recorded activity data in graphical form, view virtual tours representing their progress, and see their ranking on a leaderboard, all of which make walking as a habit more enjoyable. 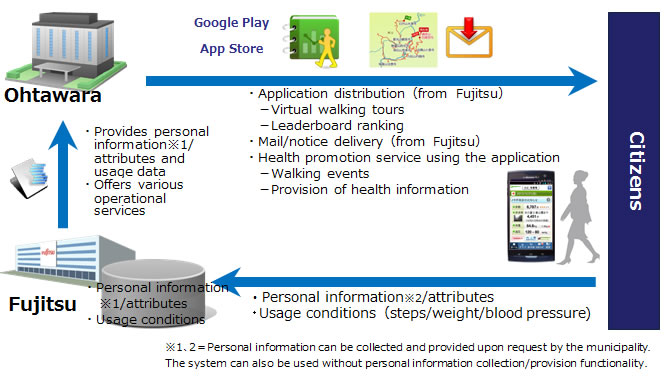 Pricing and Availability for Local Governments

Apple and the App Store are registered trademarks of Apple Inc. in the US and in other countries.