There are a multitude of vein authentication devices in the market, including those for the finger or back of the hand, but the newly developed sensor is unique for its compact form factor, being 5.2 mm thinner and 56% lighter than conventional sensors. At approximately 4.0 g, the size has been reduced to a 25.0 mm width, a 25.0 mm depth, and a height of 6.0 mm. This makes it easier to incorporate into a broader range of electronic devices, including the thinnest of today's notebook PCs and tablets. This, in turn, helps to expand the range of potential applications for palm vein authentication.

With the inclusion of a feature that continuously captures palm vein images, instantly pick out the best image for authentication, and automatically verify, users can easily perform authentication by simply placing their palm lightly over the sensor.

To enable biometric authentication to be utilized in a wider range of locations and circumstances, Fujitsu has sought both robust security and superior user-friendliness for its palm vein authentication technology. At the same time, it also aims to develop smaller, thinner sensors that can be incorporated into a variety of electronic devices.

Fujitsu has worked to develop and commercialize thin, miniature sensors capable of being integrated into the design of notebook PCs. However, in order to make the technology readily applicable to an even broader range of applications, there has been significant demand for even thinner and smaller sensors that maintain the same high standards of security and usability.

With an eye toward incorporating this sensor into a variety of electronic devices, Fujitsu has developed the world's smallest, slimmest and lightest vein authentication sensor among a multitude of vein authentication devices, including those for the finger or back of the hand. Moreover, to facilitate integration with older versions of PalmSecure and to help users migrate to the new technology, Fujitsu has ensured compatibility with older generations while preserving the same usability, including continuous image capture and automatic verification functionality. The key features of the new sensor are as follows:

To enable an even smaller and slimmer form factor, Fujitsu newly designed lighting and optical systems as components inside the sensor used for image capture. In fully leveraging its advantages as a palm vein authentication sensor that is contact-free and employs an image-reflective method for authentication, the new sensor is 25.0 mm wide, 25.0 mm deep, and 6.0 mm tall, and weighs 4.0 g or 56% less than conventional sensors. As a result, the new sensor is the world's smallest, thinnest and lightest of its kind, thereby greatly increasing the range of devices into which it can be incorporated. 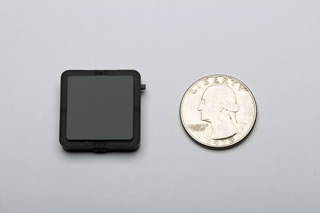 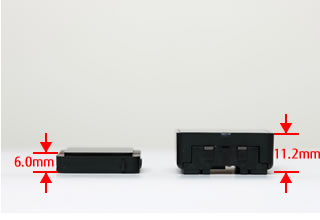 The new sensor is able to continuously capture palm vein images, instantly pick out the best image for authentication, and automatically verify. This allows users to perform authentication by simply placing their palm lightly over the sensor for high accuracy and convenience.

3. Can be used in combination with previous PalmSecure technology

For customers who currently use older PalmSecure technology (notebook PC sensors, built-in keyboard sensors for desktop PCs, attachable PalmSecure-SL sensors), Fujitsu has ensured that the new technology is compatible with older registration/authentication data formats(2) and employs the same familiar operation methods, such as the way users hold their hand over the sensor. This makes it easy to use the new sensor in combination with existing sensors while also helping users migrate to the new technology.

In recent years, biometric authentication, which can accurately identify individuals based on their biological characteristics, has grown in popularity as a means of personal identification. Of all the existing biometric approaches, vein authentication, which reads the invisible pattern of veins in the palm or finger, offers the benefits of being both highly accurate and resistant to misconduct such as forgery and impersonation.

Compared to finger veins, palm veins are more numerous and create complex patterns, resulting in a higher volume of data. Consequently, the system's recognition accuracy is extremely high, with a false-negatives rate of 0.01% (a single retry) and a false-positives rate of 0.00008%(3). Furthermore, the fact that the system uses an individual's thicker veins allows for stable operations over time. Lastly, the system is contact-free, helping to reduce any existing psychological burdens placed on users.