Fujitsu and NAOJ Begin Operation of Supercomputer for ALMA

Fujitsu and the National Astronomical Observatory of Japan (NAOJ) today announced that they have jointly developed and recently launched operations of the purpose-built Atacama Compact Array (ACA) Correlator supercomputer system, which will be employed as part of the Atacama Large Millimeter/submillimeter Array (ALMA) project, a Chile-based radio telescope featuring unprecedented sensitivity and resolution. A ceremony was held in Chile to commemorate the inauguration of ALMA on March 13, local time.

Comprised of 35 PRIMERGY x86 servers from Fujitsu and a specialized computational unit, the ACA Correlator meets the rigorous requirements demanded by the project, including computational performance capable of performing real-time processing of 512 billion samples of telescope radio signal data per second at a computational rate of 120 trillion operations per second, as well as the ability to ensure stable operations under harsh environmental conditions at an altitude of 5,000 meters and pressure of 0.5 atmospheres. The system will be responsible for processing massive sets of signal data from 16 antennas on its own. 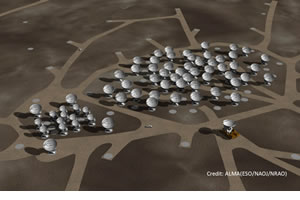 Set at 5,000 meters above sea level in the Chilean Andes, ALMA is a massive radio telescope developed through a partnership among East Asia (led by NAOJ), North America and Europe. The telescope is capable of producing astronomical radio wave images with the world's highest resolution. The facility consists of 66 antennas arranged in a 18.5 km-diameter array, equivalent to the span of the Yamanote railway loop encircling the central part of Tokyo, and by processing millimeter/submillimeter wave(1) signals from each antenna, it is possible for the antennas to act as a single, giant telescope that can generate radio wave images with the same resolution as those produced by a massive 18.5 km-diameter parabolic antenna. This makes it possible to see the dark regions of the universe that cannot be observed at optical wavelengths, such as galaxies that were formed shortly after the beginning of the universe, the birth of stars, planetary systems like our solar system, and matter related to the origin of life, such as of organic molecules.

NAOJ and the Fujitsu Group worked together to develop the ACA Correlator, a purpose-built supercomputer responsible for processing data from the Atacama Compact Array (ACA)(2), which can make high sensitivity observations.

The system is comprised of 35 PRIMERGY x86 servers from Fujitsu and a specialized computational unit developed by Fujitsu Advanced Engineering Limited. With the ACA Correlator, it is possible to process extremely weak radio wave signals from far-away astronomical bodies by splitting up and processing roughly 500,000 frequency bands and outputting the data in a format that is optimal for observation. This enables resolution capability that makes it possible to observe, for instance, the traveling of a gas in space at a speed of 5 meters per second.

Features of the ACA Correlator 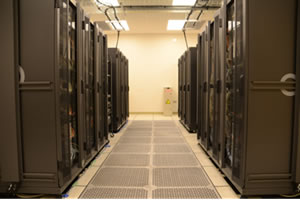 ACA Correlator is capable of reading up to 512 billion data samples per second (roughly 200 GB/sec), equivalent to the data transfer speeds supported by 20,000 residential optical broadband lines (at a rate of 100 Mb/sec each).

These massive volumes of data can be processed in real time at an ultrafast computational rate of 120 trillion operations per second. A variety of steps have been taken to reduce the number of required computations, thereby enabling efficient data processing.

The system is able to reliably operate under harsh environmental conditions at an altitude of 5,000 meters and pressure of 0.5 atmospheres. In order to overcome drops in cooling efficiency due to the 0.5 atm pressure, the system was designed with a parallel array of 4,096 identical processing LSI units that are interconnected by 1,024 fiber optic cables. This ensures a sufficient stream of air for cooling, which prevents heat from being unevenly distributed and densely accumulated.

To ensure stable system operations at a high altitude to which it is difficult to dispatch a full-time engineer, it is necessary to perform equipment diagnostics, software upgrades and other maintenance tasks remotely from Japan or the area's base camp, located at an altitude of 2,900 meters.

The system is equipped with a host of features that enable speedy and fine-grained remote operations, including a feature that monitors and records data processing flows at multiple points within the correlator, as well as a feature that improves fault detection accuracy by replicating the system's actual operational status using massive sets of embedded test data.

Conventionally, correlators have been developed based on custom-designed LSI technology, which has made them very costly to implement.

The ACA Correlator uses a newly developed parallel computation method that employs general-purpose LSIs called FPGAs(3) to split up data received from antennas every 250 microseconds, after which the data is distributed among 4,096 LSIs. This, in turn, delivers excellent price performance.

"With the observations from ALMA, we hope to gain insights into such mysteries as how galaxies have formed and evolved, how planetary systems orbiting around a Sun-like star are formed, and whether the origin of life is to be found in the universe. The data processing performed by the ACA Correlator system is essential for these types of radio astronomy research. I am confident that ALMA will open new horizons for astronomy."