Fujitsu Arabia and the Saudi Industrial Property Authority (MODON) today announced that they have signed a contract for the development and operation of an environmental management system in MODON (Saudi Arabia's industrial) cities.

Based on the agreement, Fujitsu and MODON will work together to build a monitoring system that employs sensors that measure air and water quality in order to constantly monitor environmental pollution. The new system will be installed in the Dammam 2nd Industrial City in the Eastern Province, the Riyadh 2nd Industrial City in the Saudi Capital, and the Jeddah 1st Industrial City on the west coast. Furthermore, Fujitsu has formed a consortium with Fuji Electric Co., Ltd. and METAWATER Co., Ltd., and, after development of the system is complete, will oversee operations of the system and environmental monitoring, in addition to providing consulting aimed at improving the environment based on information gathered by the system accumulated from sensors.

This project is part of an overseas infrastructure and system export initiative of Japan's Ministry of Economy, Trade and Industry (METI). Under the collaborative relationship between Japan and Saudi Arabia, Fujitsu and MODON will strive to leverage knowledge and technology from Japan to support Saudi Arabia's efforts to improve the environment.

In February 2012, the organizations signed an additional MOU, entitled "Memorandum to Collaborate on an Environmental Management System and Smart Community Initiative." Since then, Fujitsu formed a consortium with Fuji Electric, METAWATER, and Mizuho Corporate Bank, and conducted a feasibility study based on METI's overseas infrastructure export initiative.

Now that the feasibility study has been completed, Fujitsu and MODON have agreed to launch full-fledged business collaboration and have signed a contract for the development and operation of the environmental management system. 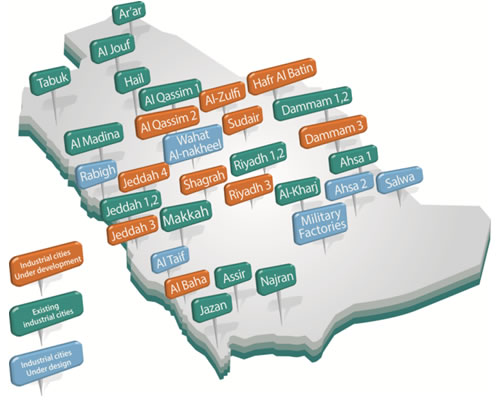 Comments from Representatives of Fujitsu and MODON

Masahiko Yamada, Head of Technical Computing Solutions Unit, Fujitsu Limited
"We are delighted that Fujitsu and MODON have signed an agreement to build and operate an environmental management system. I believe this contract was awarded in recognition of the value of the solutions offered by our all-Japan consortium, which, in addition to Fujitsu's ICT and environmental solutions expertise, includes the technologies of each member of the consortium. With this contract, we would like to contribute to improving the environment of Saudi Arabia's industrial cities and the future creation of an Eco Industrial City."

Eng. Saleh Al-Rasheed, Director General, MODON, Saudi Arabia
"MODON as a semi-governmental entity is responsible for the development of industrial cities with the integrated infrastructure and services; whereas MODON has established industrial cities in various regions in the Kingdom of Saudi Arabia. We are committed as MODON to create a harmonious relationship between industries and the environment, and this project is a stepping stone for MODON to take the lead for environmental management systems in all industrial cities."

MODON is a government agency established in 2001 to develop, operate and maintain industrial cities and technology zones in partnership with the private sector. MODON has established industrial cities in various regions of the Kingdom and currently oversees 29 existing or under development cities located in several provinces and focus in major cities like Riyadh, Jeddah and Dammam. MODON's target is that during the coming five years, the number of industrial cities shall reach 40 industrial cities with developed industrial lands of not less than 160 million square meters. For more information, please see http://www.modon.gov.sa