Fujitsu Limited and Fujitsu Laboratories Limited today announced the industry's first in development of a water-based paint for use on the plastic chassis of servers, personal computers, and other ICT equipment. The new water-based paint is used on the front panels of the SPARC M10-4 and SPARC M10-4S in the SPARC M10 series of UNIX servers available in 2013.

This newly developed water-based paint uses two kinds of resin in a core shell structure(1), and tuning the volatility makes it possible to create adhesion between resin particles and enable painting at low temperatures. Compared to solvent-based paints, this cuts the use of petroleum resources by 54% and volatile organic compounds (VOCs)(2) by 80%.

Fujitsu plans to expand the use of this kind of paint in its own products, such as servers and notebook computers, as a way to use natural resources more efficiently and reduce its environmental footprint.

Volatile organic compounds react in the air with light, and are one of the components leading to photochemical smog. VOCs are included in paints, printing inks, adhesives, detergents, gasoline, and thinner. About 40% of all VOC emissions are accounted for by paints(3), so reducing the amount of VOCs used in paint is an important issue in global environment conservation.

Paints are comprised of several materials: resins, which form a coating with pigments that produce color and luster as the components in the coating; and solvents auxiliary agents, which, as volatile components that do not form part of the coating, are included to thin the materials and help them cover more smoothly. Most of the VOCs in paint are in solvents, so an effective way to reduce use of VOCs would be to switch from a paint that uses solvents to dissolve the resin to a water-based paint that mixes the paint in water.

Today, most ICT equipment, such as servers and personal computers, uses solvent-based paint, and switching to water-based paint presents the challenges of drying the paint to cause the resin particles to bond, and maintaining the level of paint performance demanded in the context of ICT equipment chassis.

With solvent-based paints, the resin particles that will make up the coating are dissolved in solvent, so they adhere easily to the surface being coated, but with water-based paints, the resin particles are suspended in the water as tiny particles, rather than being dissolved, so making them join together and bond requires the liquid to be boiled. Most water-based paints need to be heated to a temperature of 100°C or above to boil and then dry the liquid, but the plastics used for ICT equipment chassis cannot withstand such high temperatures without deforming. Furthermore, the requirements for solidity, adhesion, chemical resistance, weather resistance, and appearance for paints used on ICT equipment chassis make high-performance coatings a necessity. 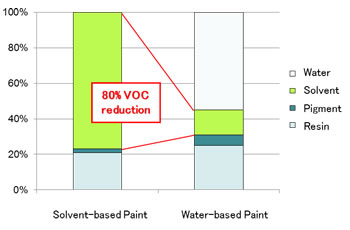 Comparison of components in solvent-based and water-based paints

Fujitsu Laboratories has developed a water-based paint that can be dried at a temperature that does not cause plastic chassis to deform, with resin particles that can bond, and that has the coating performance required for ICT equipment.

By fine-tuning its volatility, this water-based paint can be dried at a low temperature of 65°C, cool enough not to deform plastic chassis. In addition, it uses two types of resin in a core shell structure, so that a soft resin is used in the shell to encourage bonding between particles. The core uses a hard resin to form the tough coating that ICT equipment needs, resulting in coating performance suitable for use in ICT equipment chassis.

Use of this water-based paint cuts VOC emissions by 80% compared to conventional solvent-based paints. Also, because it does not use solvents, it lowers the use of non-renewable petroleum resources by 54%, contributing to more efficient use of resources. The first computers in the industry to use this water-based paint are the new UNIX servers SPARC M10-4 and SPARC M10-4S, where the paint is used on their front panels. 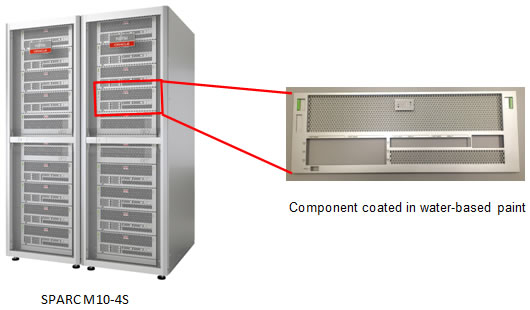 Fujitsu plans to expand the use of this kind of paint to other ICT equipment as part of its general efforts toward efficient use of resources and a reduced environmental footprint.