Fujitsu Laboratories Limited today announced the development of a digital signal processor (DSP) for use in mobile device baseband processing. By employing a vector processing architecture(1) as used in supercomputers, the DSP can efficiently run highly repetitive processes common in LTE(2) and other wireless processes. This, in turn, allows for greater energy efficiency.

By using 28-nanometer (nm) process technology and when running at 250 MHz, DSP is capable of processing data at 12 GOPS (12 billion operations per second). Excluding memory, the DSP measures only 0.4 mm2, and it consumes only 30 milliwatts (mW) of power, 20% less than existing DSPs.

The new DSP is expected to help lengthen talk times, usage times and standby times for smartphones and other mobile devices. In addition, revisions to the signal processing algorithm can be implemented through modifications to the DSP program, enabling fine-tuning of reception characteristics after the wireless baseband LSI has been manufactured, thereby contributing to shorter development lead times.

Details of the new technology will be presented at the 2013 International Symposium on VLSI Design, Automation and Test (2013 VLSI-DAT), scheduled to open on April 22 in Taiwan.

In recent years, smartphones, tablets, and other wireless devices have rapidly gained in popularity. As the speed of wireless networks increase, manufacturers have launched models that support new wireless communications standards such as LTE, which is currently being rolled out worldwide, in addition to conventional standards such as GSM and 3G. To support these wireless standards, a signal processing circuit (baseband processor) compliant with each computation is required. As a result, being able to reduce the size and power consumption of baseband processor components is crucial to improving the cost and battery life of devices.

Typical baseband processing circuits are implemented using specialized hardware to support each communications standard, requiring a number of circuits to support different standards. Consequently, reducing the size of circuits has proved challenging. On the other hand, there exist alternative software-based approaches to supporting each communications standards using DSPs. Given the massive signal processing requirements of LTE, however, these approaches are limited in their ability to simultaneously achieve both high processing performance and low energy consumption.

Fujitsu Laboratories has developed a new DSP that employs a vector processing architecture used in supercomputers. The DSP can efficiently run highly repetitive processes that are common in LTE and other wireless processes, thereby achieving greater energy efficiency.

Key features of the newly developed DSP are as follows:

LTE uses the OFDM(3) modulation method and communicates by bundling data that is carried by up to 1,200 "subcarriers" in a wireless signal. To extract information from an incoming signal, the DSP must apply the same process repeatedly for each subcarrier. This makes the vector approach more effective. 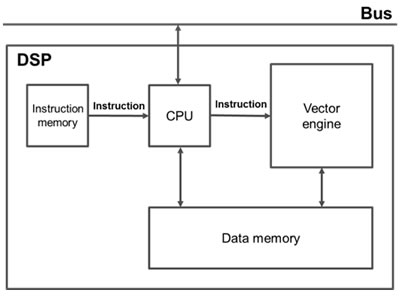 Figure 2 shows an internal diagram of the vector engine itself. Instructions transferred from the CPU are stored in the instruction buffer. Stored instructions are decoded one by one by the sequencer, and the required vector processing pipeline(4) is controlled to execute the instruction. The number of vector data (vector length) that can be calculated in a single instruction is 64 data elements, a value optimized for use in mobile device baseband processing. Rather than processing 64 data elements sequentially, eight parallel processing elements process the data in eight rounds, thereby achieving higher speeds. 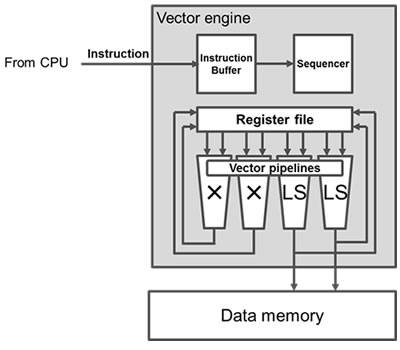 With the addition of the newly developed vector engine, many pieces of data can be processed with a single instruction, thereby enabling more efficient data processing. This, in turn, will significantly contribute to reduced energy consumption in wireless baseband LSIs. A DSP using 28nm process technology and running at 250 MHz is able to process 12 GOPS (12 billion operations per second). Fujitsu Laboratories succeeded in developing a compact DSP that measures only 0.4 mm2 (without memory) and, in terms of power consumption, requires only 30mW—a 20% improvement over existing DSPs.

The new DSP is expected to help lengthen talk times, usage times and standby times for smartphones and other mobile phones. In addition, revisions to the signal processing algorithm can be implemented through modifications to the DSP program, enabling fine-tuning of reception characteristics after the wireless baseband LSI has been manufactured, thereby contributing to shorter development lead times.

The new DSP will be incorporated into a communications processor from Access Network Technology Limited that is scheduled for use in Fujitsu smartphones and elsewhere. Going forward, Fujitsu Laboratories plans to continue making performance improvements to the processor to enable it to keep pace with advances in higher speed wireless communications standards.