Software-only approach enables over 30 times improvement in file transfer speeds between Japan and the US, reduces virtual desktop operating latency to less than 1/6 of previous levels

Fujitsu Laboratories Limited today announced the development of a new data transfer protocol that, by taking a software-only approach, can significantly improve the performance of file transfers, virtual desktops and other various communications applications.

Conventionally, when using transmission control protocol (TCP)(1)—the standard protocol employed in communications applications—in a low-quality communications environment, such as when connected to a wireless network or during times of line congestion, data loss (packet loss) can occur, leading to significant drops in transmission performance due to increased latency from having to retransmit data.

To address this problem, Fujitsu Laboratories has succeeded at a software-only approach, developing: 1) A new protocol that incorporates an efficient proprietarily developed retransmission method based on user datagram protocol (UDP)(2), an optimized way to deliver streaming media able to reduce latency resulting from data retransmission when packet loss occurs; 2) Control technology that addresses the problem of UDP transmissions consuming excess bandwidth by performing a real-time measurement of available network bandwidth and securing an optimal amount of communications bandwidth without overwhelming TCP's share of the bandwidth; and 3) Technology that, by employing the new protocol, makes it possible to easily speed up existing TCP applications without having to modify them.

Through a simple software installation, the new technology will make it possible to speed up TCP applications that previously required costly specialized hardware, and it can also be easily incorporated into mobile devices and other kinds of equipment. Moreover, compared with TCP, the technology enables a greater than 30 times improvement in file transfer speeds between Japan and the US, in addition to reducing virtual desktop operating latency to less than 1/6 of previous levels. This, in turn, is expected to make it easier to take advantage of various applications employing international communication lines and wireless networks which are anticipated to become increasingly widespread.

With the increased popularity of mobile devices and cloud services in recent years, a wide range of applications have begun to utilize communications capabilities. In many applications, such as file transfer, virtual desktop, and other communications applications, TCP is employed as a standard communications protocol. One issue with TCP is that data loss (packet loss) can occur in low-quality communications environments, resulting in significant drops in transmission performance (reduced throughput and higher latency) due to increased latency from having to retransmit data. In the future, it is expected that there will be greater opportunities to take advantage of international communications lines and wireless networks, making it necessary to ensure that transmission performance does not drop even when connected to a low-quality communications environment.

Currently, one well-known method of speeding up application transmission speeds in low-quality communications environments is to employ specialized acceleration hardware. This kind of specialized equipment, however, is expensive and bulky, making it difficult to incorporate into mobile devices. High-speed transmission methods for transferring files using software-based acceleration also exist, but to support a variety of existing TCP applications using these methods, it has been necessary to make modifications to the traffic processing components of each application.

By developing a proprietary software-based transfer protocol, Fujitsu Laboratories has succeeded in significantly improving the throughput and operating latency of existing TCP applications.

Fujitsu has developed a new protocol that incorporates a proprietarily developed and efficient retransmission method based on UDP, a protocol optimized for delivering streaming media. As a result, the new protocol is able to reduce latency resulting from data retransmission when packet loss occurs. The protocol can quickly distinguish between lost packets and packets that have not yet arrived at their destination, thereby preventing unnecessary retransmissions and latency from occurring. By incorporating the new protocol as a software add-on to UDP, it is possible to maintain the high speeds typical of UDP while avoiding packet loss and packets being sent in reverse order, UDP's main weaknesses. This, in turn, has enabled improvements in packet delivery and latency. In a comparison with standard TCP, the new protocol achieved a throughput increase of over 30 times during a simulated file transfer between Japan and the US, and operating packet delivery latency was reduced to less than 1/6 of previous levels. 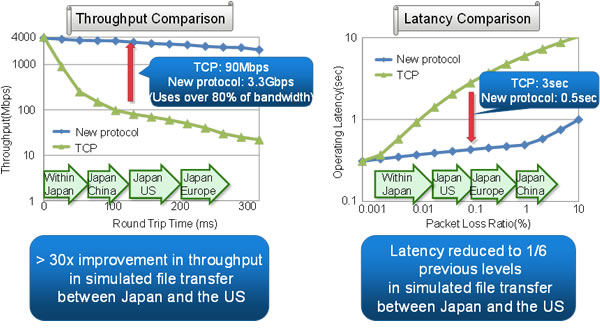 3) Technology for accelerating existing TCP applications without any modifications

Fujitsu Laboratories has developed a technology that automatically converts TCP traffic standard for a wide variety of applications into the new protocol described in (1) above. This makes it possible to significantly improve the speed of a host of existing applications, including file transfer applications, virtual desktop applications, and web browsing applications, all without the need for any modifications.

The use of the new technology is expected to speed up the performance of a wide range of communications applications employing international communication lines and wireless networks which are anticipated to become widely used more and more. For instance, the technology can help speed up web browsing and file download speeds in mobile communications environments where there is deterioration due to building obstructions or movement. In addition, the technology can improve data transfer speeds between datacenters in Japan and the US. It is also expected to help improve the usability of virtual desktops when accessing a virtual desktop located on a remote server using a low-quality communications environment (Figure 2). 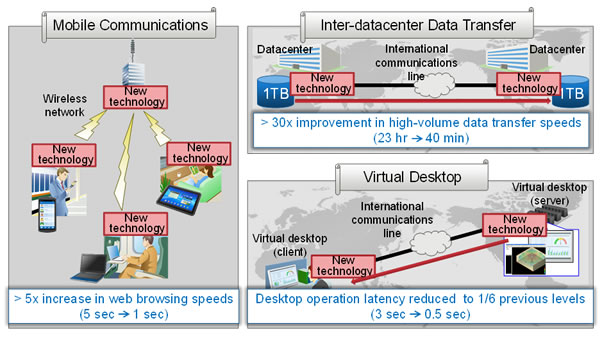 Figure 2 Applications of the New Technology

During fiscal 2013, Fujitsu Laboratories aims to commercialize the new technology as a communications middleware solution for improving communications speeds without having to modify existing TCP applications.